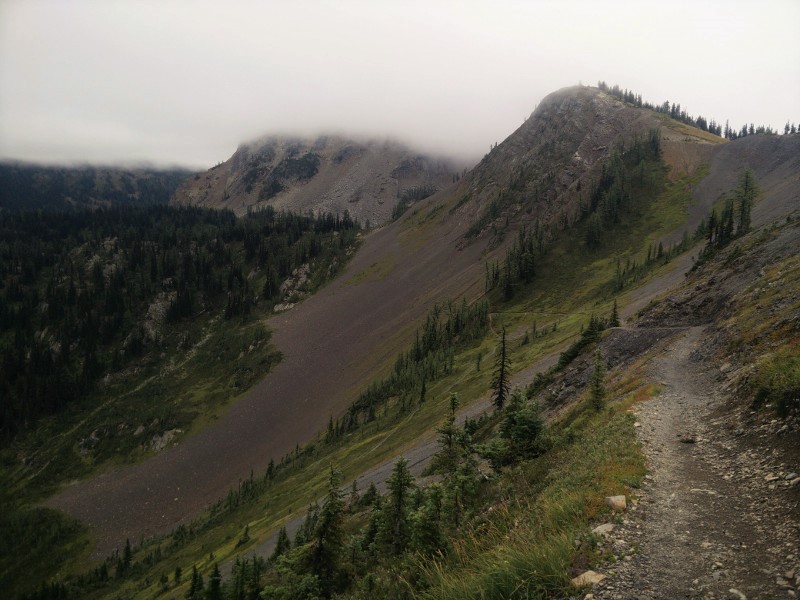 Washington, I decided, was the gorgeous drama queen of States. It was beautiful to look at, but it was a giant pain in the ass.

We awoke to a dense, low hanging fog and temperatures in the low 40’s. The trees still dripped from last night’s rain.

“It’s like Washington wants us to leave the same way we entered, cold and wet,” Krav said from his tent.

When I went to answer him, I could see my breath. Burr, this was entirely too reminiscent of Washington 2013. I wouldn’t have been the least bit surprised if we saw snow before we hit Canada.

On the bright side, it had stopped raining, our tent was watertight, the rain had to have helped the fires, and we were only thirty-three miles from Canada!

I went to get out of the tent, only to discover I couldn’t stand up straight. I don’t know what I slept on, but my lower back was killing me.

“Bring it on Washington,” I thought. “You’ve already thrown rain, snow, fire, trail closures, and detours at us. Is a little back pain all you have left in your bag of tricks?”

Landslides? Tornados? On second thought, I didn’t want to know what else Washington had up her sleeve. I just wanted to get to Canada alive, and I was prepared to crawl there on my elbows if I had to.

Breakfast was a quick affair; it was far too cold to linger. Hefting my damp backpack on to my aching back, the best I could manage was a hunched over hobble. I downed a handful of Vitamin I and hoped for the best.

The good thing about a cold, misty morning was that—pain or no pain—you wanted to hike fast just to stay warm. That, and there were no spectacular views to distract you from doing anything but hiking.

Foggy Pass, was exactly that. Jim Pass was no better. Then down came the rain. We were we cold, we were wet, but we were happy. We were going to Canada, and there was nothing anyone could do to stop us.

Eventually, around Holman Pass, it stopped raining, and at the next small stream, we took the opportunity to eat lunch and filter water.

This was our last lunch together on the Pacific Crest Trail. From here on out, everything would be a “last.” Our last dinner on the trail, our last campsite, our last day. This was bittersweet. We were all looking forward to finally making it to Canada, and yet none of us wanted the trail to be over. None of us wanted the adventure to end.

“Yeah, me too,” Bearclaw sighed.

There was a long silence. We missed Bearcat.

“Yeah, it sucks,” Krav said. “But then again, nothing sucks like an Electrolux.”

This was a pure Bearcat!

“Efficiency is key,” I added.

“ACCCHHHILLLLEEESS!!!!!!” Bearclaw roared, and then we burst out laughing.

The only thing that would have made finishing the trail better, we agreed, was if Bearcat had been able to join us so that we could finish as a family.

On and off, the fog lifted, revealing vast valleys and sweeping meadows and then we were cast back into the rain and dense fog.

Ten miles from the U.S. / Canada border we could see blue sky ahead.

“Looks like it’s sunny in B.C. at least,” Bearclaw said.

We unanimously agreed Washington had it in for us.

Near Devil’s Staircase, the fog lifted again, just enough to give us a clear view of Hopkin’s Lake nestled far below. Originally, we had wanted to make this our evening destination, but now we were driven to continue. We wanted to camp as close to Canada as we could.

Passed Hopkin’s Pass, we found a talus pile and sat down to make dinner. This was our last dinner together on the Pacific Crest Trail. The pikas must have sensed this, as they came out in droves and even allowed us to snap a few photos.

It was dusk when we arrived at Castle Pass. Off to the left of the trail was a big open campsite. Already, a tent was set up in the far corner. We were a little bummed to share our last campsite with a stranger, but it would have to do.

Our packs were wet; our tent was still wet. Krav’s down sleeping bag was damp on the side that had been facing the back of his backpack. Still, there was nothing Washington could do to rob us of our joy, of our sense of accomplishment.

Getting ready for bed, I heard a voice from the stranger’s tent.

“I know that voice!” I said to Bearclaw.

“What? Who do we know that it could it be?” Bearclaw said

I heard the stranger’s tent unzip.

“Where is Hot Mess and everyone else?”

At the fire detour, the crew had split up. Some had obligations back home, some had opted to walk the detour, and others had opted to go to Lake Chelan. Littlefeet had ended up ahead of them all. After having hiked together for month’s he now faced the reality of arriving at the border alone. The trail provided, and no we could arrive together as friends and celebrate each other’s victories. I knew for him, it wouldn’t quite be the same – a trail family is a bond that cannot easily be forgotten – but at least it was something.

We cozied into our sleeping bags, for one last sleep on the PCT. We were only four miles from Canada. 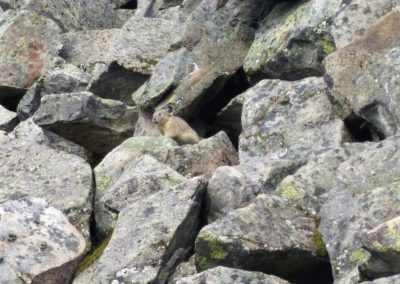 Finally, I Got One! 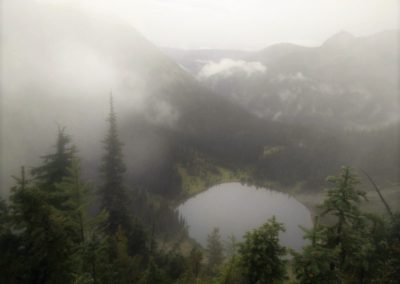 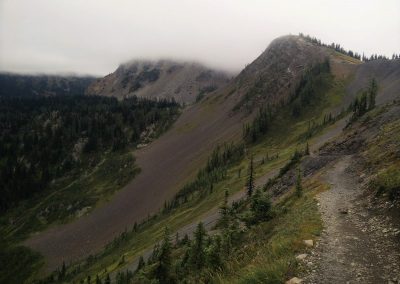 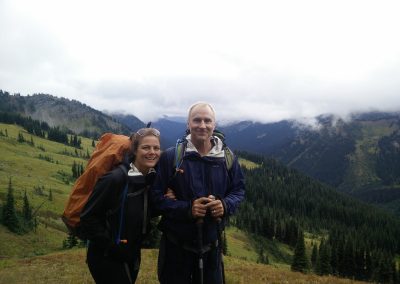