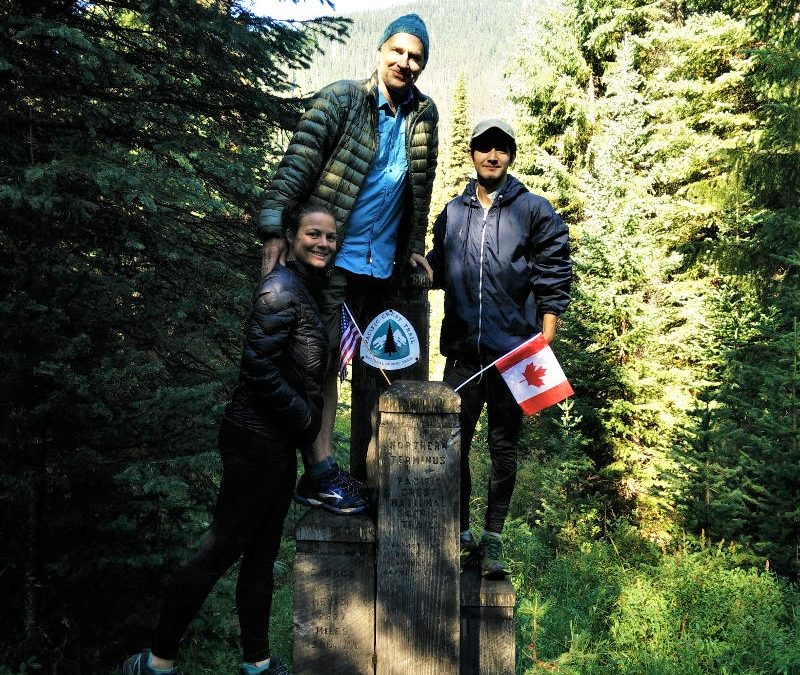 We ate breakfast with Littlefeet, but it was hard to stay present. We were all too excited. Only four short miles stood between us and Canada. Big breath.

It was still foggy, but it was shaping up to be a nice day and truth be told, we didn’t care. It could have been snowing, the forest could have been burning down around us, and we wouldn’t have cared. You could walk through anything for four miles if you had to. We were going to make it to Canada!

Littlefeet was the first one out of camp, but we were not that far behind him. Krav took off and was gone like the wind.

I can’t tell you what the trail looks like between Castle Pass and Canada – a blur of green I suppose. I did see a ptarmigan, but the photo I took was blurry because I didn’t care enough to stop and take a proper photo.

We were half a mile from Canada when we came across Krav. He wanted the three of us to get to the monument together, and so he had been waiting.

Elbows out, we joking raced each other to the finish to see who would “get there first,” pretending to trip each other along the way. Krappypants was in the lead.

And then, just like that, the trees parted, and there it was – the northern terminus of the Pacific Crest Trail. Five wooden pillars of various heights stood next to a metal pillar in the middle of a twenty foot wide clear-cut that stretch as far as the eye could see in either direction.

On the tallest of the wooden posts, the familiar crest of the Pacific Crest Trail greeted us like an old friend. We had faithfully followed this symbol all the way from Mexico; although it hadn’t always been easy, it had never once led us astray. On the next lower pillar, the U.S. and the Canadian flags waved in the early morning breeze. The sun came out, the birds sang in greeting. All was finally right in our world.

Littlefeet had arrived a few minutes before us, giving him a chance to reflect and to write in the log book about his incredible 2,660-mile thru-hike.

We celebrated together, snapping pictures and pulling out the four mini bottles of champagne we had carried from Rainey Pass. The fourth bottle had been for Bearcat, but now that we were there with Littlefeet, we couldn’t very well cheers without him!

Littlefeet filmed, while we made Bearcat a video, pouring some of our champagne out in honor of our fourth Musketeer. Afterwards, we toasted our success.

The logbook made its rounds, from Krav to Bearclaw, and finally to me. What to write? How do I adequately describe something that has changed me so profoundly? What words of thanks could ever express how deeply grateful I was for this trail and the lessons it had taught me? How could I summarize something that was so profound it was impossible for me to even fully comprehend?

I read Krav and Bearclaw’s entries.

8/16/15 I am finally here! This moment that seemed it would never come, actually arrived too quickly. The PCT has ruined me…in the best possible way! So much pain, and so much beauty! Thank you to my amazing wife Hummingbird for sharing this incredible journey with me, I love you! Congratulations to all of you on this amazing accomplishment!!! Bearclaw, Tread Lightly…

Another thru-hiker came through. We congratulated him. He had us snap a photo or two, then he asked for the log book. Not sure what to write anyways, I handed it to him. He had pre-written a beautiful, well thought out piece on a separate piece of paper. Ripping two pieces of duct tape off of his trekking pole, he taped it into the logbook and snapped it shut. And then, he was gone, as if he had some pressing engagement to attend to in Manning Park.

“That would have been us in 2013,” I couldn’t help but think to myself as I watched him disappear. It took being snowed out and having had two years to mourn that loss, to learn from it, and to think about it, for me to fully understand and appreciate what being here truly meant to me. That was my path. Those had been my lessons to learn, and every one of those lessons had led me here, now.

08/16/15 – Snowed out in 2013 less than 400 miles from Canada, I cried. I cried a lot. But I also learned. I learned that some goals, are worth pursuing relentlessly. Washington has thrown everything at us – rain, snow, hail, storms, poor trails, fires, and wind – yet we persisted. I have wondered for two years now how I would feel arriving at this monument. Would I be sad the journey was over? Would I be excited? Would I cry? Now I am here, I feel strong. I feel excited for the next adventure. I feel gratitude for the experience, for the magic, for my trail family. I feel at peace. I love you Bearclaw. There is no one else I would have wanted to do this with. You are my rock. Krav, I love you, bro. Bearcat, wish you were here.

“We shall not cease from exploration
And the end of all our exploring
Will be to arrive where we started
And know the place for the first time” – T.S. Elliot.

The story, of course, does not end here. For I was not at the end of all my exploring, I had simply come to end of another great adventure.

Armed with this knowledge, Krav, Bearclaw, Littlefeet and I left the monument and made our way into Canada.

It was eight miles from the monument to Manning Park. When we arrived, the parking lot was abuzz with tourists. Somewhere in there, dad and Marianne were waiting for us. Bearclaw turned off of the road to go find them.

“I’ll be right behind you,” I told him. “I have to do something first.”

“Have to do what?” Bearclaw asked.

I held up my phone with the Halfmile App.

“I have to finish the trail,” I responded.

Bearclaw followed me up the road. I watched as the Halfmile App counted down the final few steps. Where the road to Manning Park joined the Highway, my app hit all zeros, and I was left standing at the Official end of the trail.

Immensely satisfied, we turned around and headed back to the parking lot. Dad and Marianne were as excited for us as we were; giving us big congratulatory hugs. Together, the six of us got a cabin at the Manning Park resort and spent the afternoon celebrating. 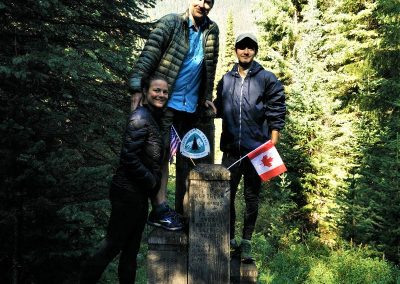 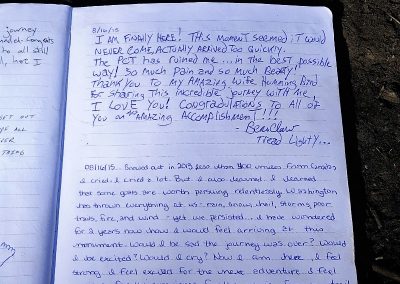 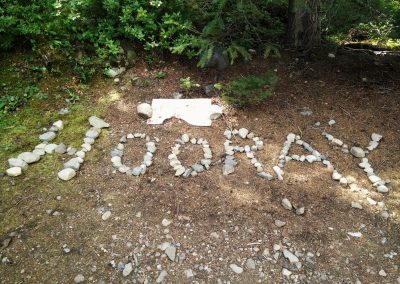