What Doesn’t Kill You Something, Something 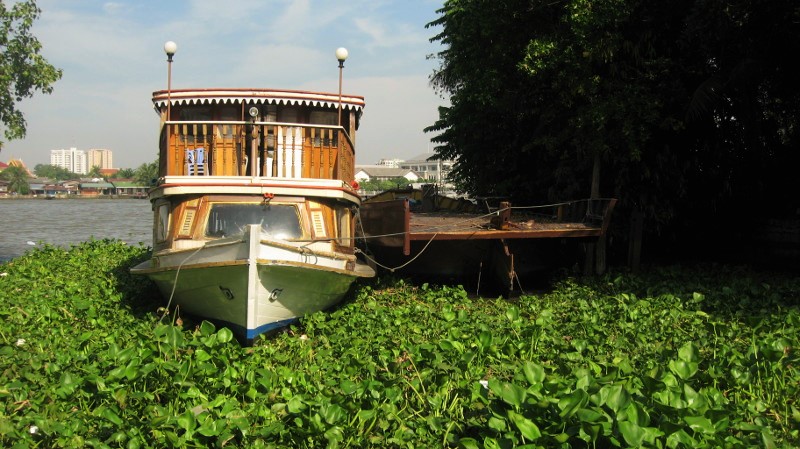 Carl and I had spent an entire day walking Bangkok. It was now dinner time and we were starving, but more than that, we were on a mission to find some of the “amazing” Thai food everyone kept raving about. We had been in Bangkok for nearly a week, and the best food we’d had thus far had been the Chinese Dumplings we’d found deep in the bowels of the Thieves Market in Chinatown.

We headed down Soi Rambutri sniffing street carts and perusing restaurant menus until we came across an extremely busy curry vendor. It smelled delish and at $35 B ($1.10 US) for rice and two curry sides, the price was right.

“You like Thai Spicy?” The vendor asked, pulling out a plate and piling on the rice.

Was he kidding? This chica grew up in Mexico.

“I LOVE spicy,” I assured him.

He pointed out his spicy dishes, and I picked my two. I sat down and breathed deep, the pungent aroma of lemongrass, ginger, coconut, and “Thai Spicy” seducing my nostrils.

I bit in. All at once, I found myself eating both the tastiest thing I had ever put in my mouth and the spiciest. Seriously, this food must have been concocted in Satan’s own kitchen, holy freaking hell. I swear everyone seated near me must have thought I had Turrets. Bite. Expletive. Bite.

Poor Carl, who had also had the misfortune of answering the question with a yes, looked at me forlornly.

“I am so hungry, but I can’t eat this,” he said through tears, as he dabbed at his nose with half a roll of toilet paper.

Up until this exact moment, we had both questioned why every table at every restaurant, had a roll of toilet paper (cleverly disguised in a cute plastic dispenser) and not the napkins or paper towels we were accustomed too. Now, we understood. When you ate “Thai Spicy” you didn’t need to daintily wipe your fingers, you needed to blow your nose and dry your tears.

My nostrils were on fire. I couldn’t breathe. Tears streamed down my cheeks. I completely understood where Carl was coming from, but yet I couldn’t stop shoveling this hellspawn into my mouth because it was just so damn tasty! I could feel the ulcers forming in my gut with each bite. I had a distinct feeling that I would be regretting every spoonful of this in the very near future. And yet, I continued.

Carl watched in disbelieve and admiration as I finished as much of plate as I could. I felt nauseous. I had broken out into a feverish sweat. My heart was beating abnormally fast. I know doctors would say this was not caused by the spice but to them I say, go eat authentic “Thai Spicy,” and then we’ll talk.

We were two blocks away before my eyes stop watering.

Still hungry, Carl stopped for spring rolls at a vendor near our hotel. He kindly offered me some. I was unsure at this point if I had permanently burned off my taste buds because they just tasted like burning.

We stopped for a beer ten feet further up the street to try and douse the flames, but even the big beer was like trying to put out a forest fire with a spray bottle. What I needed was a twenty ounce Pepto Bismol and a straw.

“Why did I eat the whole plate?!” I moaned. I wanted to curl up on the sidewalk and cry; only I knew if I did one of the crazy motocross scooter people who used the sidewalks as an extra lane would run me over.

I finally understood why such a large portion of the “Eating Out” section of my ‘Learn Thai App’ had been dedicated to being able to communicate the exact amount of spice you could physically handle without dying at the table.

Thai Spicy didn’t just put Mexican Spicy to shame… it kicked its ass at its own game, shot it in the back when it was least suspecting it and buried it six feet under.

Stumbling into the hotel, I laid down on the bed and vowed to memorize the words for “not too spicy, please.” 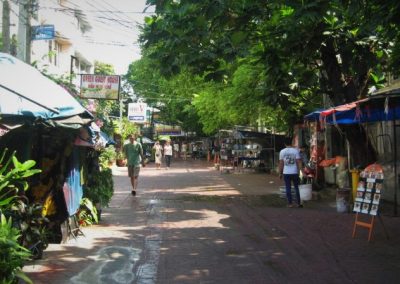 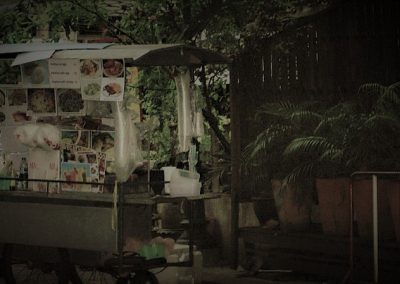 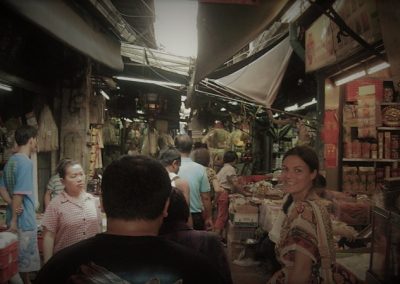 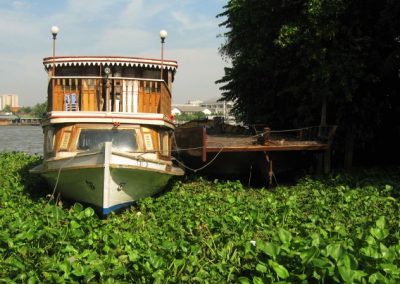 A Boat on the Chao Phraya