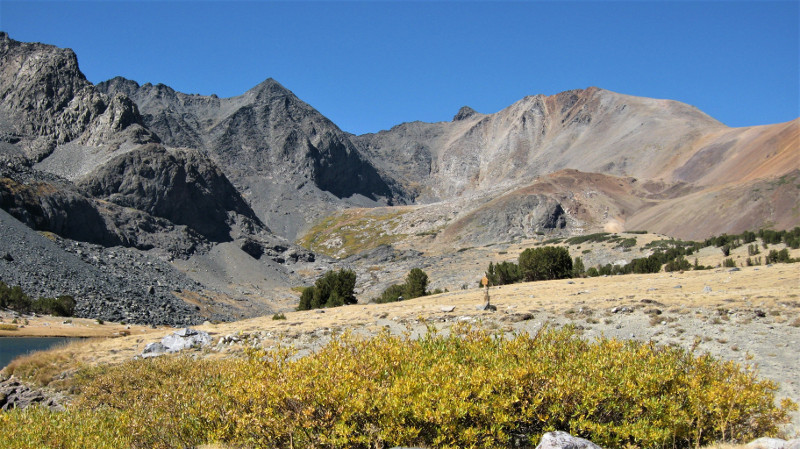 Our fourth day on the trail (and fifth day in Yosemite) was a long one. We would end up hiking nine miles over two passes, the second of which was 12,350 feet. But it was a popular trail so how bad could it be? Right? – Or so we thought as we sat there drinking our bear drool Starbucks and discussing the day ahead.

We had not passed a soul all morning; a fact we attributed to the late season. Although everything was cast in golds and burnt orange now, it wouldn’t be long before everything was covered in white. Especially at these elevations.

At midday, we stopped for lunch at a small cobalt blue lake near the base of Koip Pass. The pass looked formidable, and as hard as we looked, we couldn’t see any sign of a trail headed up and over. “It must be there,” we thought, “maybe we just aren’t looking in the right spot?”

We finish lunch, filtered some water and continued up the trail. At the base of the climb was a sign, with an arrow pointing straight ahead, on which someone has carved an additional arrow pointing right.

Right there was no visible trail at all, just a handful of random rock cairns. Straight, there was a faint trail. The topo on the GPS said right. Maybe they had moved the path?

I voted for straight, after all, why would the National Park Service missign a popular trail? Straight led us alongside a chain of pocket lakes before unceremoniously dying in a rock-strewn meadow. I chose wrong.

Carl used the GPS to get us back to the sign, where we followed the roughly carved arrow and the rock cairns to the right. This led us to a series of faint and hellish switchbacks up a large talus field. This is where I learned an important lesson, switchbacks at 12,000 feet are incredibly arduous.

We would walk one length of the switchback, stop, breathe, and then repeat. It felt like we had done this a hundred times before we reached the summit. I was so excited to see a sign on a level surface I could have kissed it… Until that is, I saw what was waiting for us on the other side…

Walking down the back side of Koip Pass is the scariest thing I had ever done. I wanted a diaper, no scrap that, I needed a diaper. I am not a huge fan of heights when they are shear, my head spins, and my feet turn to jelly. On normal people trails, this has never been an issue. I am not, however, on a “normal” trail. If this trail is “popular,” it is popular with mountain goats. It is, at most 14 inches wide and meanders across a cliff and down a talus pile that is somewhere in the steepness range of, oh, I dunno 80 degrees? There is a part of the trail that has washed out where the trail is just wide enough that if you place one foot in front of the other, you won’t fall to your death. I am scared, and I shuffle down the mountain only because my wonderful husband has my hand and is coaxing and encouraging me with every step.
When we get to the bottom and look up, he says, “I cannot believe we just came down that.” From the bottom looking up, we can see the underside of the washed out area, a stretch of glacier clinging to a shaded crag and then a sheer cliff all the way to the valley floor. We both wanted to pass out, barf, or maybe both simultaneously.
We camp as close to the Pass as we can, not because I want to look at it but because it took me so long to get down it, it’s almost dark.
The following day, when we return our bear bins to the Wilderness Office, Carl asks, “Out of curiosity, how “popular” would you say the Koip Pass Trail is? Would you say 1,000 people a year?”
The ranger laughs, “No.”
“50? 100?”
“Maybe 20.”
When I’m done writing Backpacking 101, I think I should read Chapter 1.