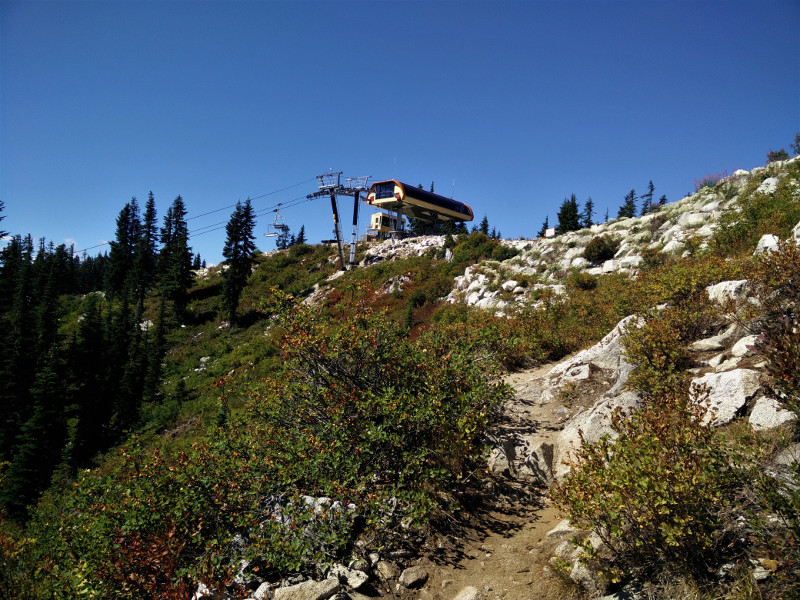 It was cold; not Washington snowstorm cold, but cold enough that when our Krav alarm went off, no one was motivated to peel themselves out of their sleeping bags. I popped my head out of the tent to see Krav making breakfast from bed again.

Usually, I don’t make breakfast from bed out of fear of accidentally lighting the tent, and subsequently the forest, on fire. Every time I think to myself, “Hey, let’s make breakfast from bed this morning,” it’s immediately followed by visions of me running around, hair singed, hiking shorts still smoldering, trying to collect all the marmots and pikas to herd them away from the flames. This morning, however, I tightly wrapped up the fly and made an exception.

Not that breakfast was that hard or even required that much cooking— we were down to a bagel, some granola, and enough freeze-dried coffee to make one weak cup. Of all the things I could have been low on, why did it have to be the coffee?! I needed it. Caffeine and sugar are Hummingbird jet fuel. How was I supposed to fly down the trail sans fuel?

The ten miles to Stevens Pass went by in slow motion. It wasn’t just the lack of coffee slowing me down; I was procrastinating. I knew that within ten minutes of arriving at Stevens Pass, I would be out on the side of Highway 2 with my thumb out. Most of the planning I’d done for this trip was just me staring at fluffy clouds, dreading the handful of times I would be forced to stand on the side of the road and beg for a ride.

It isn’t riding with strangers; I don’t mind that part. But that’s probably only because I’ve never had what I would consider an “awkward” hitch. I’ve had friends tell me stories of taking rides where the driver refused to speak to them or rides with people that drove ninety-miles-an-hour while explaining that they were recovering drug addicts. The worst was some thru-hiking friends telling me the story of a woman who’d given them a ride in California. Apparently, she’d made room for them by removing her toddler from the front seat, but not before scolding her for drinking “mommy’s beer.” I’m blessed that the nicest people tend to offer us rides.

It’s amazing how long it can take you to hike ten miles when you aren’t that motivated. We stopped a half a dozen times to put on and take off our jackets. We spent a good thirty minutes picking perfectly ripe gooseberries and huckleberries – the first berries we’d seen in abundance on the trail this year, I might add. I wandered off the trail at Mig Lake to find the “toilets” FluffyStar had been so excited about (and then felt bad for her when I discovered they were nothing more than wooden boxes with holes in the top.) And we talked to every thru-hiker, section hiker, and day-hiker we came across.

The thru-hikers and section hikers were full of woeful news regarding the fire closures. It sounded bad, but as Bearclaw reminded Krav and me, “There is no point in worrying about it until we get to Hiker Haven and have access to the latest news.”

At the top of the ski hill, we met a day-hiker that stopped my lollygagging dead in its tracks.

“You guys must be headed into Steven’s for burgers!”

“Yeah, they have a great little restaurant.”

OMG?! Why hadn’t someone informed us of this hours ago? We could already be there eating hamburgers!

And just like that, we were off, stopping only once to coax a blue-lipped Krav out of the middle of a blueberry patch. All it took was these magic words, “There’s a restaurant at Steven’s Pass.”

Halfway down the hill, Bearclaw had a horrible thought. “What if it isn’t open today? It is a Wednesday.”

“Why would the guy tell us there were hamburgers at the restaurant if it wasn’t even open?” I questioned. “If it isn’t, I’m going to hike all the way back up here and kick him in the balls.”

“Yeah, you like that?! Did that feel good?! Because that’s how my stomach felt when I found out the restaurant was closed. A$$h0le.” Krav laughed.

At the very bottom of the trail was a sign welcoming thru-hikers. The very last thing it had listed was the restaurant hours: Friday – Sunday from 10 a.m. to 6 p.m. It was Wednesday.

Lucky for that hiker, I was too lazy (and hungry) to follow through with my threat. Son of a Hamburgalar, now eating real food meant hitching.

As we walked across the overpass and down to the road, I waited for the inevitable. Wait for it….

“You should probably be the one to stand there with your thumb out– women are less threatening.”

For five minutes, I stood there, watching drivers pass by us. Not a single car so much as braked.

“I bet we’d have more luck if we just went and asked people in the parking lot if they would give us a ride,” Bearclaw said as we watched people come and go from the nearly full lot across the highway.

That sounded a thousand times better than spending the rest of the afternoon with my thumb out.

“You should probably be the one to ask – women are less threatening.”

Despite what people think, I am quite shy. I can think of a thousand things I would rather do than strike up a conversation with someone I don’t know. When I was little, if anyone I didn’t know tried to talk to me, I would run and hide behind either my mom or my dad’s legs. Unfortunately, I was now a good seven inches taller than my mom, and the same height as my dad. Besides, neither of them was here. Pulling up my big girl panties, I scanned the parking lot for someone who appeared to be leaving that looked as if they might be willing to give three dirty hikers a ride to the nearest restaurant. Sighing, I resigned myself to the fact that I was likely going to have to ask almost everyone in the parking lot before I received a “yes.”

Closest to us were two white SUVs with their back hatches open. Behind one, a statuesque woman with the killer looks of Uma Thurman in “Pulp Fiction” was loading a large blow-up whale into the trunk. A young girl in a jean skirt and billowy Boho top danced at her feet, her Barbie-blonde hair sparkling in the sun. Behind the other SUV, an impeccably dressed, middle-aged woman was closing her hatch door. There was no way these women were going to say yes. But I had nothing to lose by asking.

“Sure, but only because you’re really nice people.” Uma smiled. “We just need to rearrange a few things to make room.”

I could have hugged her for saving me the horror of having to ask anyone else for a ride (and for trusting that I wasn’t an ax-wielding maniac.) But again, that would have been creepy and weird.

Our saviors were Vhari (Uma) and her daughter Kealy. While Bearclaw sat in the front and explained to Vhari exactly what it was we were doing, Krav and I sat in the back with our new friend Kealy.

“What’s your name?” she asked.

“Really?” She smiled and stared at me a moment, trying to decide if I was telling the truth.

“Well, it’s my trail name. My friends call me Hummingbird.”

“I’ve never met a Hummingbird before.” She giggled.

Kealy was highly entertaining. She had a new stuffed bear her grandma had brought her all the way from Alaska. On the drive, she named him “Woods” Alaska Bearclaw, “Woods” being his trail name. Woods subsisted on a diet of Rock Candy, which made me think he’d make a great thru-hiker. When Kealy asked if she could pet Krav’s beard, I laughed so hard I almost cried.

Vhari was amazing. She drove us into to Skykomish, found us a restaurant, and then joined us for lunch. The fact that we were filthy didn’t seem to faze her at all. She seemed genuinely interested in what we were doing and concerned for our well-being. She even saved us from having to hitch a ride out of Skokomish and delivered us directly to the front door of Hiker Haven. Hours after they had gone, I was still thanking the trail gods for their awesomeness.

Andrea and Jerry, the trail angels that are Hiker Heaven, were as wonderful as their reputations suggested. Within no time, we had our resupply boxes, had showered, and were waiting for our laundry to dry.

There was a handful of other hiker’s hanging out— Paint Your Wagon and Sobo Fett– were headed south. While fellow NoBo’s – Czech Mix, Poco Loco, Chardonnay, and a couple who were section hiking Washington— were all trying to figure out how they wanted to continue north.

There appeared to only be two options to get around the fire closure in Section K:

1. Hitch a ride to Chelan and take the ferry up to Stehekin. From Stehekin, we could then take the shuttle back to the PCT at High Bridge; this would mean skipping a hundred and four miles of trail.

2. Hike seventy miles up the PCT to the Suittle River Trail, then hike ten miles east along the Suittle River to the trailhead parking lot. From there it would be a twenty-two-mile road walk up Suittle River Road 26 to State Route 530. From 530, it would be twelve miles to Rockport on Highway 20, and another seventy-three miles up to Rainy Pass; this was the new “official” reroute, but no one seemed to know a whole lot about it.

For Krav, Bearclaw, and I, this was a no-brainer. We would skip as few miles of trail as we could. Deciding on the “official” detour, I called Stehekin and asked postmaster Jonathan to forward our boxes to Winthrop. I then called my dad, who was driving down from Canada to meet us at Rainy Pass, and asked if he could meet us in Rockport instead. All our business attended to, we cracked open a bottle of beer, ordered pizzas, and sat down to enjoy some good old hikertrash company. 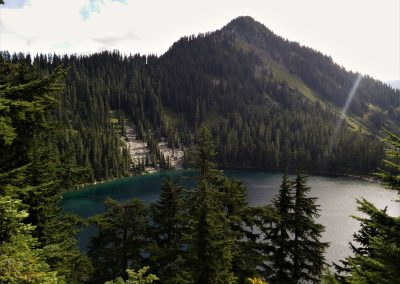 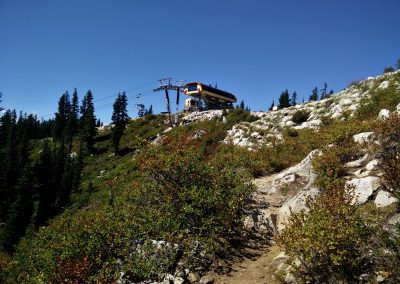 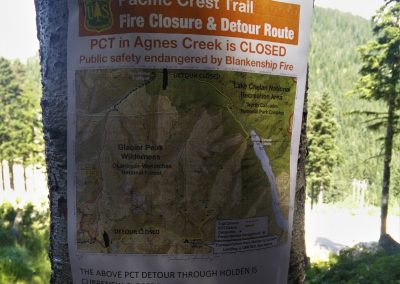 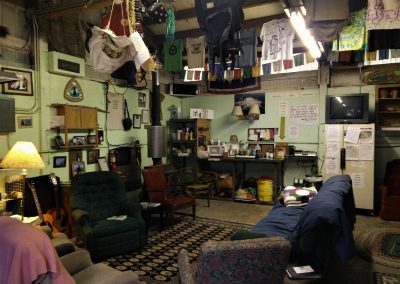