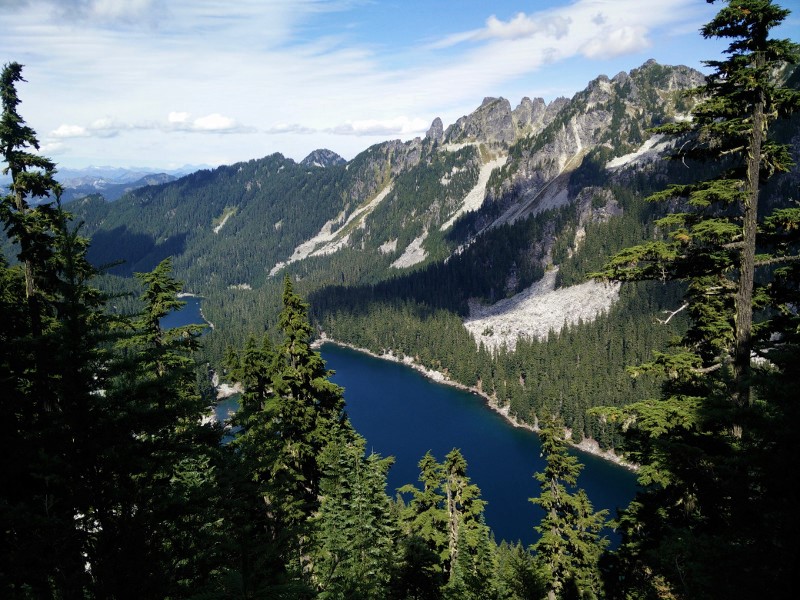 Having gone to bed long before sunset, we were up at the ass-crack of dawn, ready to hike. Even with a leisurely morning breakfast, we were still the first group to leave the lake. Hopping over the stones that crossed the outlet, we made our way up the series of switchbacks that lead away from the lake towards the top of Cathedral Pass. Still shaded from the morning sun, we hiked fast just to stay warm, watching the alpenglow that bathed the spire of Cathedral Peak slowly work its way further down the hillside. By the time we reached the top of the pass, even the deepest parts of the valley were bathed in the glorious warm morning sun. As we sat down to strip off unwanted layers, Tin Man and Crawfish cruised up behind us.

Tin Man and Crawfish never said much, and when they did, we got the distinct impression they felt as if we’d entered into an unspoken competition with them. A competition they were more than confident they would win. Krav, Bearclaw and I weren’t at all competitive, so it just made our run-ins with them awkward. Eager to beat us to where ever they thought we were going, they barely stopped at the top of the pass long enough to take in the view before they were gone again. The few conversations we’d had with them had been so uncomfortable I secretly hoped they’d stay ahead of us for the rest of the trail.

From Cathedral Pass, we had two options: staying on the Official PCT or take the alternate around Hyas Lake on the Robin Creek Trail.

Our HalfMile Maps had the following warning, “The potentially difficult ford at WA2439 may not be passable early in the hiking season after a high snow year.”

The alternate appeared to add a lot of extra miles, and it was late in a hot, dry year, so we stuck with the official trail, which worked its way high above Hyas Lake—a long navy gem at the bottom of the broad forested valley.

I’ve only been intimidated by high creek crossings once or twice in my life, mostly because I’m rarely out in the mountains in adverse weather. Call me a “fair weather” hiker if you will, but marching through early spring snowpack isn’t my thing. My last high-creek crossing had been recent enough that it played in an unstoppable loop in the back of my mind as we hiked up the trail towards the “potentially difficult ford.”

Earlier in the year, BunnySlayer, Bearclaw and I had gone on an overnight backpack into the Deschutes River Canyon. Just before camp, we’d crossed the thigh-deep, swiftly flowing waters of Whychus Creek a few hundred feet upstream from its confluence with the Deschutes River. It hadn’t been a simple hop-skip-and-a-jump, but it also hadn’t been anything we couldn’t manage. That night, however, it rained high up in the mountains, and when we awoke the next morning, the Deschutes was noticeably higher. This did not bode well for the water levels in the creek, we thought. Sure enough, the tender, early spring shoots of grass that lined the creek banks were now submerged under a good half a foot of water.

Experienced at hazardous water crossings, BunnySlayer had valiantly offered to cross first. We watched as he forced his way across the creek one deliberate step at a time.

“You’re going to want to make sure and be downstream of her when you guys cross,” BunnySlayer warned Bearclaw after he’d safely reached the far side.

Two steps in and the icy cold water was already lapping at my unbuckled hip-belt. My legs stung, my poles vibrated with such force that I could barely keep them in my hands. Two more steps and I couldn’t even force my poles to meet the creek bed. Halfway across the creek, the current was so intense it pushed my feet along the pebbly creek bed. I was being pushed downstream, and there wasn’t a damn thing I could do about it.

“Um, my feet are moving on their own you guys.” I was upright, but I knew if I slid into a big rock I wouldn’t be for long. From the bank, BunnySlayer could see the fear in my eyes.

“You’re going to need to grab her.” He told Bearclaw, who was one step ahead of me, fighting the current himself. Bearclaw turned around and grabbed my arm. Together, he and BunnySlayer pulled me onto dry land.

As we made our way towards this “potentially hazardous ford” I could still feel the unease of having no control over my own feet, and I wasn’t a fan. Theoretically, I know the basics of what you’re supposed to do if you’re swept downstream, but I’d rather not have to test this knowledge. Preferably, ever. “Remove backpack and swim to shore,” sounded simple on land, but I have a feeling the level of difficulty grows exponentially when you can’t see and are trying desperately not to drown.

The closer we got to this unnamed creek, the more overgrown the trail became. “What if no one comes this way because of how scary this crossing is?” I thought. It was late in an extremely dry season, how bad could it be? Hell, practically the whole State of Washington was on fire from what we’d heard. But what if this creek was fed by glacial melt and August when it was at its highest?

By the time we got to the creek, I’d worked myself into a complete state of anxiety. It didn’t help that we could hear the water long before we could see it. With each step leading up to the crossing, I became more and more convinced I was probably going to be swept downstream and into Hyas Lake far below.

Popping out of the brush, I could’ve burst out laughing. My big scary crossing was through an eight foot wide, calf-deep stream that worked its way through a tangle of boulders in a narrow avalanche chute. Where the trail crossed, someone had placed a mess of small logs and rocks. I’m sure during spring runoff the water roared down the chute with the ferocity of a lion, but in August it was as tame as a kitten. Three steps and I was on the far bank.

The good thing about mentally working yourself into a heightened state of anxiety over an imaginary situation is the feeling of euphoria you get when it doesn’t happen. On the far side of that little stream, I felt more alive than I had in days, maybe even weeks. Thank you adrenaline!

Funny how it isn’t the stuff you worry about that ends up getting you in the end. Instead, it’s the unpredictable stuff you could never possibly imagine that nearly kills you. Like for instance when the Air Force nearly caused me to have a heart attack and drop dead three miles further up the trail.

We’d just stopped for lunch, and I was admiring a massive conk fungus growing on the side of an old growth tree when suddenly the ground began to shake, and a sound like a freight-train reverberated off the mountains around us. I’d been so lost in thought, and the sound was so out of place, I was sure the world was coming to an end.

“What the hell is happening?” I yelled, instinctively ducking for cover behind Bearclaw.

Bearclaw and Krav watched silently as two fighter jets roared overhead, then turned to look at me as if I’d lost my damned mind. Embarrassed, I cussed out the Air Force for sneaking up on me unprovoked, then sat down to lunch.

Imaginary drowning and being attacked by the Air Force in one morning was too much for me. Out of energy, the afternoon dragged on as we walked through the woods on our way up to the tranquil shores of Deception Lake. Deception Lake was heaven on earth. Deep, green and completely enveloped in a serene pine forest. While Krav opted to use the energy he had to power to the top of Piper Pass, Bearclaw and I lounged in the shade of the trees closest to the shoreline for as long as we could. Bearclaw tried to convince me to go for a swim, but I didn’t have enough energy left to worry about lake monsters.

We stopped again at the top of the pass to admire the view of Glacier Lake far below. Noticeably lacking glaciers, or views of glaciers, or hard packed snow of any kind, Glacier Lake was not at all what I had expected. On the far side of the lake, I could see the remnants of the old Cascade Crest Trail hugging the talus slopes. I wished we were staying high, instead of dropping down to the lake and then having to climb up the switchbacks on the far side. I was too tired for switchbacks.

Getting late in the day, we stopped near a spring at the bottom of our last climb and ate an early dinner in the middle of the trail. While we were eating, two groups of hikers passed by. The first was a group of five weekend warriors. They looked annoyed and exhausted as we tucked our legs in to let them pass. The second group was two through-hikers, FluffyStar and Monk. They were quite taken by our choice of dinner locations. After all, we had clean water that didn’t need to be filtered and a flat place to set our stoves.

Concerned we were all headed for the same campsite; we asked what their destination was for the evening. FluffyStar could not contain her excitement as she told us they were going to push on for eight more miles because she had read on her map that Mig Lake had an outhouse.

Eight miles, for an outhouse? I wouldn’t have walked eight miles for a hamburger. In fact, I doubted I had the three more we needed to get to camp. How could I possibly be this exhausted after only four days?

I slowly crawled up the switchbacks on the far side of Glacier Lake, lagging further and further behind the boys. Two miles from camp, we circled a magnificent lake nestled into the bottom of an alpine bowl. Oh, how I wanted to stop and camp at that little lake. But alas, it was a good two-hundred and fifty feet below the trail, and I was too tired to veer that far off course. Besides, I could see two tents near the outlet, and if I climbed all the way down there only to discover there were no more campsites, I’d have to climb all the way back up.

A mile and a half later, we stumbled into a small meadow with a babbling brook. Grateful we’d already eaten dinner, I fell asleep to the shrill “peeps” of our pica neighbors, happy to have survived another day on the trail. 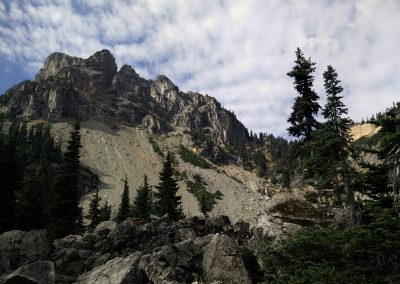 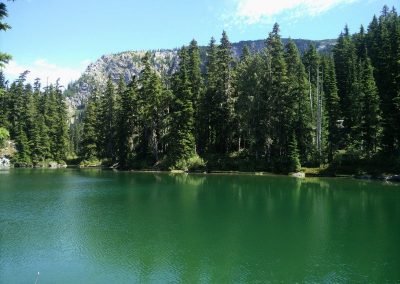 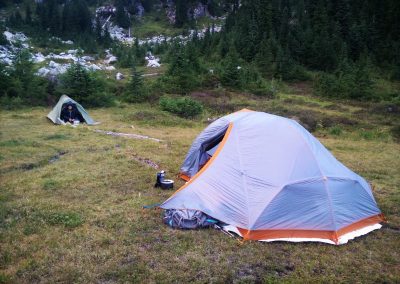