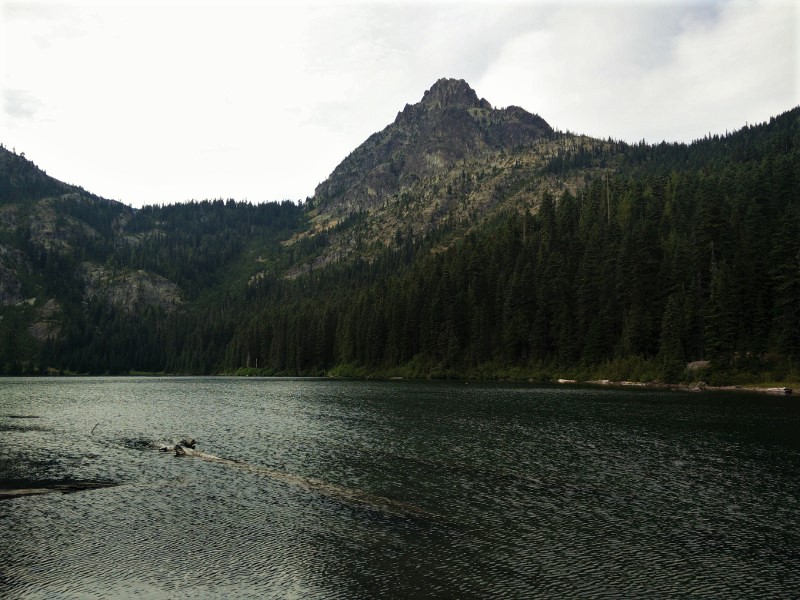 This morning was one of those mornings where I woke up and started by wiggling my toes, just to make sure my legs still worked. Upon discovering they did, I immediately gave thanks to the miraculous healing powers of the Mighty Vitamin I (Ibuprofen.)

Over breakfast, we quietly discussed our plan for the day, trying not to scare a doe and Bambi that had cautiously made their way down to the water for a drink. Everything was so incredibly dry that I felt bad for them. This little tarn was likely one of the only decent water sources for miles in any direction.

Since we’d hiked farther than planned yesterday (and it had almost done us in), we decided to make today shorter.

“How far did we wind up hiking yesterday anyway?” Bearclaw wanted to know.

“Oh, I see how it is! It’s okay to round up time, but not our mileage?!” I smiled and nodded as he laughed and shook his head.

“Deep Lake is in 14.76, or fifteen miles if you prefer,” I suggested. “That’s short enough that we might even get to camp in time for a swim.”

This idea was met with a round of approval, and so, we packed up and hit the trail.

“I’m so glad we pushed ourselves last night. I would not want to have to start today with that climb.” Krav said as we made our way up the last hundred or so feet of elevation gain. My legs wholeheartedly agreed.

I was even more glad we hadn’t pushed ourselves another mile up the trail to the “campsites near small lakes” that were listed on our maps. Because, this morning, as we got near to the lakes, we were greeted not only by a “no camping within one mile of lakes” sign, but the lakes themselves were almost completely dry. That would’ve been an epic letdown.

Though there was the occasional grand vista or milky green river coursing through sheer-sided canyons, the majority of the day was spent hiking through forests. Compared to yesterday, the scenery was relatively boring.

Near the bottom of the long descent into the Waptus River Valley, we ran into a group of eight backpackers.

“Are you guy’s thru-hikers?” They asked.

I could see Bearclaw and Krav smile. More than once over the last few days, they’d sadly commented on how no one has asked us if we are thru-hikers. I had a feeling it had something to do with the two inches of “extra padding” bulging out from above and below our hip belts. Or maybe the fact that our tongues practically lick the dirt as we slowly pant our way up the hills. We were in Washington. At this point in the game, all the thru-hikers were as lean, muscular, hairy, and fast as the elusive Sasquatch. In fact, ninety-nine percent of the Sasquatch videos on YouTube are probably just misidentified Washington thru-hikers. It would be an easy mistake to make.

We lunched alongside the Waptus River, congratulating ourselves on hiking eight miles by eleven o’clock. It took us nearly twice as long to hike the remaining six miles. We were in no rush, and the forest was hot and muggy.

A few miles up the trail, we sat down on a log and watched two lean, dirty hikers cruise up the trail as if it were flat. Now, these guys were thru-hikers! Enter Eastbound and Caesar.

“It’s the Cascadia family!” Caesar laughed, staring at all of our Cascadia clad feet. “We’ve been following your prints ever since the Waptus!”

This led to a hilariously detailed discussion about the last four seasons of Brooks Cascadia trail runners. It was agreed that the 7’s were the perfect shoe while the 8’s were a close second. The 9’s fit well but always seemed to tear in the same place after about two hundred miles, and the 10’s were just total crap.

“I know, I tried a pair of 10’s on a few weeks ago, and they’re definitely narrower in the toe box. I’m seriously considering writing Brooks a letter. They need to bring back the 7’s.”

I know what you’re thinking because I was thinking it too.

“Really Hummingbird? You’re going to write a letter? About shoes? Wow, that is totally lame.” But I couldn’t help myself – I friggin loved the 7’s, and Brooks has been slowly breaking my heart with every pair they’ve released since.

Eastbound and Caesar also had bad news regarding the Blankenship and Wolverine Fires that were burning in the next section of trail. Apparently not only were thirteen miles of trail closed, but the detour around the closure was also now closed. If we had to skip all of Section K, I was going to tell Washington where to go and how to get there. Section K represented a hundred and twenty-four of the two hundred and eighty miles of trail we had left. Sometimes, I think Washington really didn’t want us to finish the PCT.

As quickly as they’d cruised up, Eastbound and Caesar were gone.

We stopped and chatted with a wiry man in his late forties, whose calves were the size of tree trunks and whose backpack rivaled his person in both weight and height. He casually mentioned that he’d weighed it before he’d left home and proudly declared that it weighed seventy-three pounds. He went on to tell us we would almost certainly run into his wife, daughters, nephews, and lastly his brother who, “wasn’t really into this kind of thing.” As he happily skipped off down the trail as if he were weightless, I secretly wondered if his pack was magic.

Sure enough, one by one, we met the rest of the family. Some of them seemed more excited than others to be out in nature. As predicted, his brother and two young nephews were bringing up the rear. Is it just me, or is “bringing up the rear” an odd idiom? Huh.

We set up camp along the creek next to Deep Lake, and while Krav and Bearclaw napped what was left of the afternoon away, I explored the creek and chased frogs.

Just before sunset, I conned Bearclaw into checking out the lake with me by convincing him it would only be three-hundred steps up the trail. It was actually three-hundred and ten to the shoreline, not that I was counting.

Our short hike turned up a pretty alpine lake, a super friendly Californian backpacker, and an eccentric pair of section hiking pirates, proudly flying a massive Jolly Roger over their camp.

Some days what the trail lacked in beauty, it made up for in friendly, interesting people. 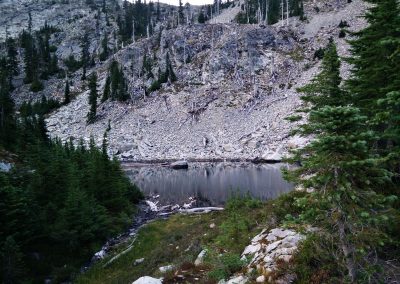 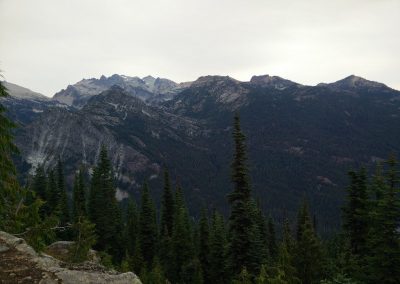 View Above the Waptus River Valley 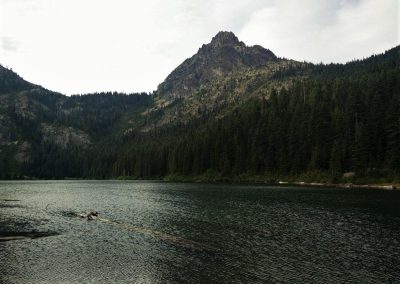 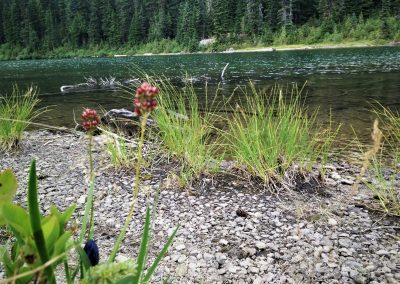