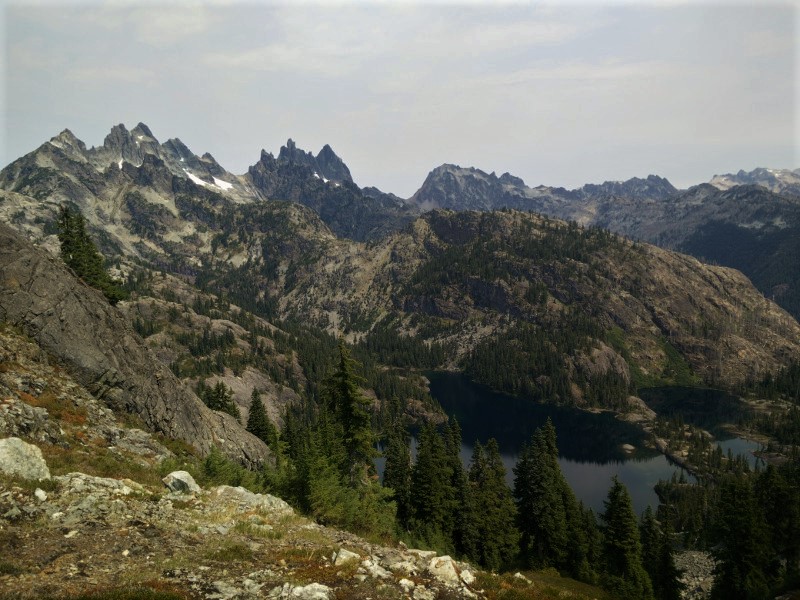 I’d totally forgotten about the Krav alarm! I rolled over and popped out of the tent, pleasantly surprised my feet, calves, and hips had made a more-or-less full recovery.

I sat down cross-legged on a bare piece of ground and started to make breakfast. To my right, the mountains the trail would be contouring around were awash in the soft peach glow of the early morning sun. To my left, in typical hikertrash style, Krav was making himself breakfast from bed. Behind him, a pika scampered up a large half-moon shaped boulder in the talus field and greeted the new day with a piercing “PEEP!”

Oh, my God, a pika! I’m of the opinion there is no cuter animal in the forests of the Northwest. Hell, even marmots are homely in comparison! (Sorry, marmots, I still love you, but we both know it’s true.)

Although the American Pika was denied federal endangered species status in 2010, their populations are dwindling. Because pikas’ habitat is limited exclusively to rocky talus fields in high mountain ecosystems, they’ve adapted to a very specific set of living conditions. The excessive heat and mild winters brought on by global warming have been lethal to pika populations across the Northwest. I felt lucky just to be seeing this little guy.

“There’s a pika!” I whispered to Bearclaw and Krav.

“Ha! It looks like a furry burrito with legs.” Krav laughed when he finally spotted it.

Abandoning breakfast, I grabbed my camera and every so slowly tiptoed towards the rock pile. I made it three steps before the pika let out one loud warning “peep” to all his little pika friends and disappeared beneath a rock. Even though I’ve gone from trying to pet every animal I see, to simply trying to sneak up and photograph them, my ongoing attempt to integrate myself into the wildlife population has thus far been a monumental failure. Wildlife: 10,482 Hummingbird: 0.

Passed Ridge Lake, the trail clung precariously to the steep wildflower filled mountainsides of the Chikamin Range. With every turn, new views of pristine alpine lakes nestled in dark green forests, and valleys that seemed to go on forever, spread out before us. Joe Lake especially caught my eye. If I’d have known yesterday how spectacular it was, I would’ve hiked the extra two miles past Ridge Lake and camped there instead! Within the first three miles of trail, Bearclaw and I had stopped to take so many pictures that Krav was nowhere in sight.

I’ve always found it interesting how all-encompassing the phrase, “Hike Your Own Hike” really is— from gear and clothing preferences, to how you interpret and choose to apply LNT principles, to the simple act of how you walk a trail. Hiking is one of those things that there is no “one way” to do. You can ask a thousand people how they hike, and you will get a thousand answers. Take for instant Krav, Krav knows he is at his best when it’s cool. In the morning, he gets on the trail, and he is gone within minutes. You can’t catch him, very few people could. The hotter it gets, the slower he becomes. His solution is to “kill” as many miles as he can, as quickly as he can. On the other hand, Bearclaw and I are slow and steady all day long. At some point around noon, we catch up to Krav for lunch, and for hours after that, we will be ahead of him. As soon as it cools off in the evening, he’ll blow by us again, and we won’t see him until camp. Besides the fact that we beat him to camp, today was no different.

When Bearclaw and I stopped for a morning break on a low saddle above the Park Lakes, we asked a German hiker heading in the opposite direction if he’d seen Krav.

“Yes, I saw a man that fits that description about twenty minutes ago. He was going quite fast.” Yup that would be Krav!

Even though Bearclaw and I picked up speed as we headed down the tight switchbacks leading around the edge of the stunning Spectacle Lake, it was nearly one o’clock when we finally caught up to Krav, cooling off in a pool halfway up Delate Creek Falls.

“It’s warm!” He assured us, as we crossed the footbridge below the falls.

I had my doubts, but it was hot enough that dropping my pack and splashing around in the shallow pools of a picture perfect waterfall sounded incredibly inviting. Hours passed before we reluctantly pulled ourselves away from the creek and continued up the trail. No one was looking forward to the 2,200-foot climb that would end our day. The trouble was this: we either had a fourteen-mile day with no climb at the end, or we hiked a twenty-mile day to the next available campsite at the top of the climb. There was nothing in between. At breakfast, we’d decided to go big.

At mile 13.9, the campsite at mile fourteen was starting to sound mighty tempting. However, when we arrived, the decision was made for us— a father/ son section hiker duo, Tin Man and Crawfish, had already set up camp there. Twenty miles it was.

Knowing we’d be so exhausted by the time we made camp that the simple task of setting up the tent would feel as complicated as disarming a ticking time bomb, we stopped at the last water source near the base of the climb for dinner.

“Are you ready for this?” Bearclaw asked as we packed up to leave.

I did a quick inventory. My ankles, feet, and hips were killing me, but that meant they still had feeling, which meant I was still alive, so that was a good start. I was exhausted. How we consistently did twenty-five mile days on the trail was a mystery.

“All you have to do is keep putting one foot in front of the other,” I told myself as we headed up the trail. I used the waterfall thundering off the glaciers of Lemah Peak on the far side of the valley as a measuring stick.

Every few switchbacks, I would come to grinding halt to see how much progress we’d made. Ever so slowly, “We’re almost halfway up the falls,” turned into, “We’re at the top of the falls,” turned into, “Yay, now we’re in line with the lower glacier.” Things were going fine until, half a mile from camp, I was reunited with my nemesis the fallen log. This particular log was one of those logs that was impossible to go around, impossible to climb under, and just the wrong height for easily going over.

Painstakingly lifting one leg over, I lay there like a cheetah hanging out on a tree limb, both legs and arms dangling over the sides, a good six inches off the ground.

“I’m stuck,” I mumbled to Bearclaw, my face smashed up against the bark, “Can you push me?”

He reached out and gingerly gave me nudge until I slid like Jell-O off the far side.

“Great, now how am I going to get over?” He looked as exhausted as I felt.

“Just swing your leg over, and I’ll pull you.” I offered pathetically.

Accepting this as a viable solution, he swung his leg over the log. I tugged on his backpack until he too slid over, and we both found ourselves on the winning side.

The log defeated; we stumbled into a sandy campsite tucked alongside a shallow tarn just in time to watch the sun set behind Lemah Peak. The last of the light hadn’t even faded from the horizon before we were fast asleep. 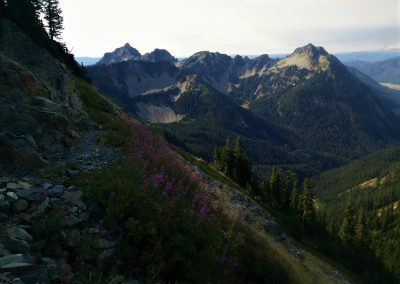 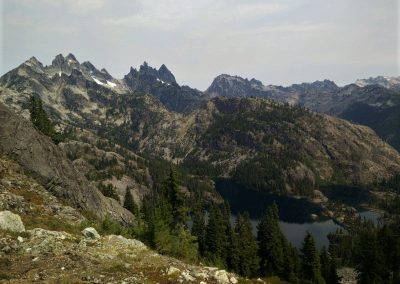 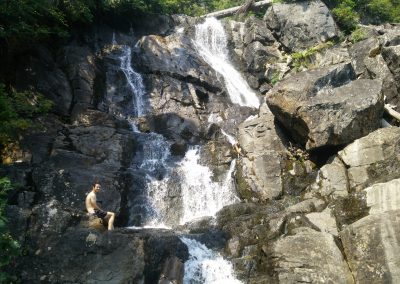 Krav Taking a Dip in the Falls 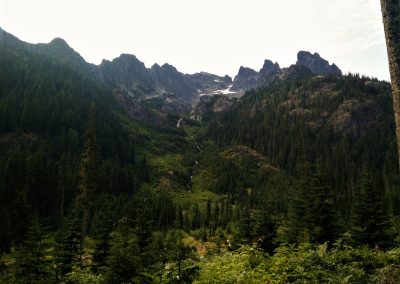