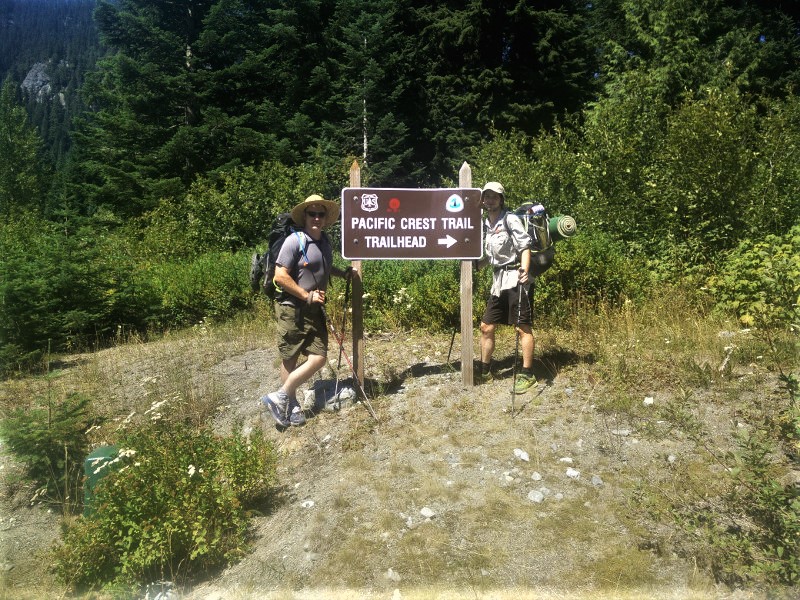 “Are you guys excited?” My friend Tree asked as she drove us up to Snoqualmie Pass from her parent’s house in Ellensburg.

Truthfully, I was exhausted and stressed. Two nights of little-to-no sleep and I was a barely functioning human being. Mentally, I was still at work. Did I remember to send out that last email to let everyone know I had no intentions of working for the next three weeks? What if there was a catastrophic failure in a client’s auto-campaign while I was gone that brought down Facebook and society as we knew it? Ha! Who was I kidding, I didn’t even remotely have that kind of power! Most days I congratulated myself just for being at my desk by eight with my underwear on the inside of my pants. Still, I didn’t even have my laptop with me. I felt naked and vulnerable.

I was also nervous. Could we hike eighteen miles a day? Our “training” had involved two weekend backpack trips and three whole visits to the gym, where I’d spent thirty minutes pretending I remembered how to swim laps. Next to the lane of Master’s Swim Club members torpedoing across the length of the pool, I’d had all the grace and stamina of a giraffe caught up in a flash flood. Oh well, as Bearclaw liked to say, “Nothing gets you in shape for backing, except backpacking.”

Speaking of backpacking, I’d packed our backpacks in less than an hour because there just hadn’t been enough time. I hoped I hadn’t forgotten something important. During the entire drive to Ellensburg, I’d been going over it in my mind. Tent? Check. Sleeping bags? Check. Sleeping pads? Check. When I got to the end of the list, I would start all over again. I was driving myself insane. What I needed was to disconnect, to decompress.

And then, it dawned on me; we were headed back to the trail! In less than an hour, we would be at home in nature, and virtually nothing I was currently stressed about would matter. My entire life was about to be pared back to the essentials – food, water, shelter. The trail was about to kick my ass in the best possible way and remind me what was really important.

“Where are you supposed to be meeting your friend Krav?” Tree asked as she pulled into the parking lot of the only gas station in town.

“Just look for a tall skinny guy with dark hair and no beard,” I responded. Krav had started a week before us, picking up at the Snowgrass trailhead where snow had forced us to get off the trail in 2013. As Bearclaw and I had already hiked that section last summer, we’d told him we would meet him in Snoqualmie.

Snoqualmie Pass was a blink-and-you’ll-miss-it village; there were only a few places he could be. My bet was he was at one of the only three eateries in town. What would it be like hiking with Krav after so much time had passed? Was he the same guy? How much had he changed? How long would it take him to be like, “Oh my God, I hiked with these people for how many months?”

We found him sitting at the thru-hiker table at the Aardvark. He walked over and gave us a huge hug. His once jet-black hair was now a deep shade of chestnut brown, but other than that, he appeared to be the same old Krav.

As Krav unpackaged his Snoqualmie resupply box, he filled Bearclaw and me in on the last hundred and twenty miles he’d hiked.

“Two nights ago, I was listening to some music while setting up my tent in the dark when I started to feel like I wasn’t alone. I looked left, nothing. Looked right, nothing. Looked back to the left and all I could see in the light of my headlamp were a cougar’s head and eyes. He was just staring at me.”

“Dove into my tent and started yelling until it went away.” Krav smiled. God, how I’d missed this guy!

“It’s too bad Bearcat couldn’t be here.” He sighed. We all agreed.

By the time Krav had eaten brunch and was packed up and ready to go, it was early afternoon. We pulled out the maps, decided that if we could make it eight miles to the top of the climb out of Snoqualmie, we would be doing good, and hit the trail.

“Where is the trail from here anyway?” Bearclaw asked as we headed down the side of the highway.

I pulled out my Halfmile App.

“You’ve missed that, haven’t you?” Bearclaw smiled, shaking his head in amusement at the obvious joy I was getting from consulting my GPS.

On weekends, when we hiked out-and-backs and loops, there were always a finite number of miles, a foreseeable end. This loop was sixteen miles; that loop was twenty. We always ended up precisely where we started, right back at the car. Not on a long trail, not on the PCT. On the PCT, we could hike for months and never reach our destination, and even if we did, we could always just turn around and hike back. There was absolutely nothing stopping me but my own fear and insecurities. Oh, and inevitably running out of money. For some reason, this thought put me in a complete state of Zen.

At the trailhead sign where the PCT diverged from the highway, we stopped for a few quick, “We’re back!” photos before excitedly ducking into the forest. We were back on the PCT!

The excitement wore off approximately three switchbacks in when my calves and thighs began to burn. We needed to gain 2,40O feet of elevation over the next seven miles? Ughhh… I probably should have made time for a fourth trip to the gym.

“We must have gone at least a mile and gained five hundred feet.” I thought, stopping to catch my breath and consult Halfmile. Or, you know, just a third of a mile and two hundred feet. This was going to be a long, slow, painful, ass-kicking.

A few miles in, the trail entered a talus-filled clearing, where I happily stopped to snap photos of a snowcapped Mount Saint Helen’s trying hard to still be visible through the smoky haze.

“You guys picked the hottest time of the day to climb this mountain, didn’t you?” A girl with long dreadlocks smiled happily as she and a friend breezed by us on their way back to town.

Fond memories of hellishly hot climbs out of Wrightwood, Cajon Pass, Castle Crag, Belden, Sierra City, Saied Valley, and Crater Lake, came flooding back to me. We did seem to have an uncanny knack for waiting until the hottest part of the day to climb. Were we sadists or did we just like getting sweaty and stinky? I’d already caught a whiff of my armpits, and I was well on my way to sporting a scent I like to refer to as “Eau du Hikertrash.” I am such a classy lady.

“Yeah, we have a tendency to do this kind of thing a lot.” I sighed.

As they passed by, I tried to spare their nostrils by keeping my elbows glued to my sides. I looked like a T-Rex, holding trekking poles.

Nearly to the top of the climb, I sadly realized that even though we’d been hiking for hours, I’d barely paid any attention to the trail. Instead, I’d been making a list of things I needed to do when I got back to work and prioritizing it for efficiency. No matter how hard I tried to turn it off, I couldn’t. It was as if the constant buzz of the I-90, echoing off the steep mountains around us, was tethering me to reality.

Eventually, the trail leveled out as it wrapped around a smooth rock ledge, passed over a short ridge, and promptly ducked behind a thick rock shelf. Just like that, the persistent din of traffic speeding towards Seattle, and all my anxiety was gone. I was officially on the trail.

“Do you hear that?” I asked Bearclaw.

“Hear what?” He asked, pausing a moment to listen.

“Silence,” I responded, closing my eyes and reveling in it.

We finally arrived at Ridge Lake around six, shocked to discover there were already fifty or so tents crammed into every campsite available. Every side trail we went up led to another tent. It took a lot of searching, but we finally found the last spot: a meadowy patch of grass, just big enough for two tents, hanging high above the serene lake.

Using the last bit of energy we had, we made our way down to the lakeshore for water. The lake was easily two feet lower than normal. Working our way through a muddy flat, we made our way to the rocks that lined the far side of the lake.

“Be careful when you waddle over here that you don’t fall in the lake Hummingbird,” Krav advised as he watched me work my way towards the spot he and Bearclaw had found to sit and filter water.

“Waddle? Did you just say waddle?” I asked indignantly. “That doesn’t have very nice connotations you know…”

“Well, you do kind of waddle.” He replied with a cocky grin.

Aww, I preferred to think of it as more of an ‘out-of-shape hiker shuffle.’

“Hey man, I am a Hummingbird, not a Penguin.” If I hadn’t used what little energy I’d had to waddle down to the lake to get water, I would have gone the extra four feet and pushed him in. But as it was, my hips and my feet were too sore. So instead, I filled up my Camelback and waddled back up the hill to bed. 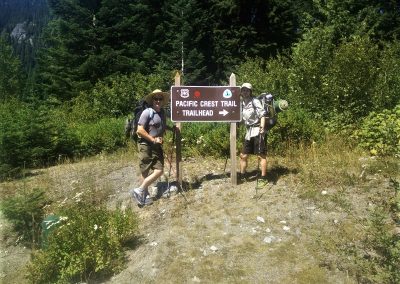 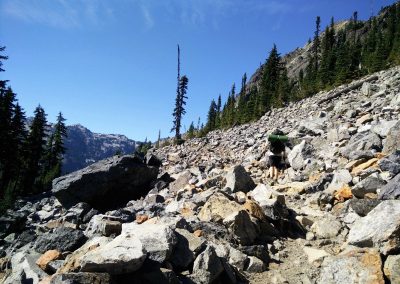 Over the Talus and into the Woods… 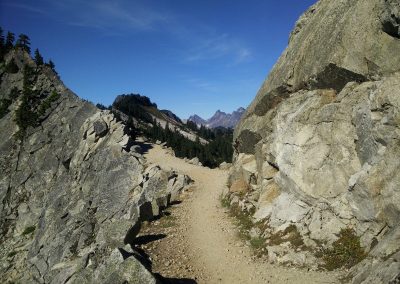 The Wall that Blocked out the World 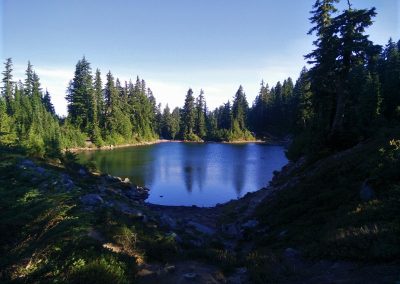