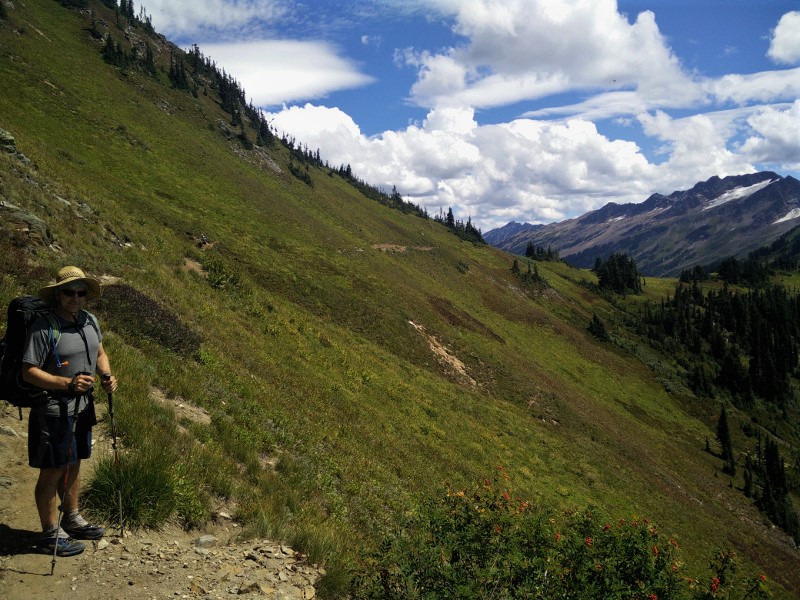 We may have had a crappy night’s sleep in our cramped, uneven tree hole, but we awoke in an exceedingly good mood considering. With only one tent to pack up and a chill in the air, it did not take us long to get back on the trail.

We arrived at Lake Sally Anne around breakfast time, to discover it was packed! With tents crammed into every available space, we all agreed that trying to find a campsite after dark would have been a nightmare. As we followed the PCT around the east side of the lake, we watched in disbelieve as dozens and dozens of campers emerged from seemingly nowhere to make breakfast, drink coffee, and get ready for another day in the backcountry. Suddenly, we were that much more gratefully for our solitary little hole in the gnarled trees.

Side trails crisscrossed and joined the PCT at random as we passed Ward’s Pass and Dishpan Gap. There were no roads marked on our maps, but from the number of hikers and trails, we assumed there must be some nearby.

It wasn’t hard to see why the area was so popular; everywhere we looked was postcard perfect and just when we thought it couldn’t get any better, it did.

Coming over a gentle rise, we found ourselves entering the Glacier Peak Wilderness. In front of us, the trail sloped down through a giant meadow and disappeared into the thick pine forests at the base of Indian Head Peak. Beyond the grassy peak (which was sadly devoid of the glaciers marked on my map) a snowcapped Mount Baker teased us in the distance. Luckily, we would get to hike around Mount Baker, before we had to veer off of the trail for the fire closure.

We stopped at Indian Head Creek for a snack, and again a few miles up the trail to simply drink in the beauty that surrounded us.

My brother-in-law constantly hounded Bearclaw and me, “I don’t know why you guys always have to have a destination when you’re out in nature. Why not just sit on a rock for two or three hours and enjoy what’s in front of you, now.”

Though the determined and goal driven side of me balked at this (gotta’ make those miles yo), the rest of me had to agree; life was too short to pass all this beauty by.

As hard as I try, I have always found it difficult to be present, truly present. My mind is always thinking about the “what if’s” and the “should do’s” and the “wouldn’t it be cool if’s.” I have an excellent imagination, and I hate to say it but most of my time is spent a million miles from reality. Maybe, that’s why I liked hiking. It connected me to the present, even when my mind was far, far away.

We ate lunch near White Pass, lingering in the August sun.

From White Pass to Red Pass was hell for me, and for nearly two miles, I wished I truly was a million miles away, and not just in my head.

The trail gently climbed up the side of a mountain, through meadow and grass. There was nothing wrong with the trail itself, or with the views. The problem was me. There is an angle at which my vertigo goes into overdrive, and the mountainside we were walking on was at that angle.

The downhill side of the trail began to swim in my vision. The path was suddenly far too narrow. I felt nauseous. In my head, I was almost certainly going to fall off the mountain at any moment. My legs felt like Jell-O.

Hiking ahead, Krav was oblivious to my distress. Bearclaw however, was acutely aware of my “height” issues.

“Even if you did fall,” he assured me, “you would stop in like five feet. It’s not that steep here.”

Logically I knew this, but when I start feeling like this, my brain tells me I will spontaneously and without reason, fall, and I will not stop. I will just keep on falling and falling forever, into nothing.

“Oh no, really, I’m a badass hiker,” she said unconvincingly as she clutched her husband’s backpack and whimpered in fear of the big bad mountains. I mean seriously…

I’ve been slowly trying to come to terms with this fear/issue because it’s ridiculous (even to me.) I’m a grown ass woman.

“Want to hold onto my pack?” Bearclaw asked knowingly.

“No, I’m okay,” I mumbled, on the verge of tears. Every step was a fight with myself.

I am happy to report that I made it to the top of Red Pass on my own, with no help. I was fighting back tears and shaking like a leaf, but I made it and, unsurprisingly, I did not fall off the side of the trail and tumble all the way down to the bottom of the mountain on the way.

The view on the other side of Red Pass was worth every single scary step. Mouth open, I completely forgot how terrified I had been moments earlier. A broad, scree-strewn basin lazily curved around White Chuck Cinder Cone to our left and disappeared into the valley beyond. In front of us, stark, barren peaks rose in every direction. Off in the distance, the White Chuck Glacier sparkled in the mid-day sun.

This was worth a sit, and an attempt at being in the moment. We did not, however, sit for two or three hours, because, you know, miles.

Dropping into the basin, we were all in awe. Can you believe this place? Could this get any better?

Turning into the Chuck River Valley, the trail was all downhill as we entered back into the forest. Our goal had been to make it up and over the first of many big climbs by nightfall, but alas, we had stopped one too many times to take in the scenery.

We made camp next to the milky Baekos Creek. As we ate dinner, a couple through hiking the trail decided to join us in camp. She was Purple, on account of her purple hiking skirt. For the life of me, I cannot remember his name. Exhausted, we climbed into bed, where, instead of being present, I worried about how scary the next few passes would be, and whether or not I was up to the task. 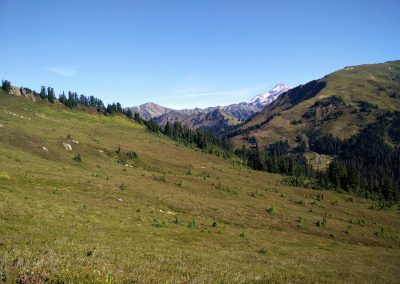 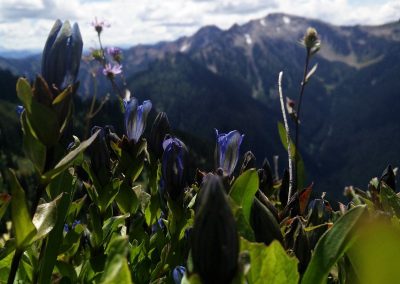 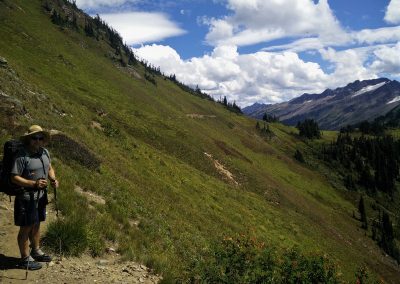 I’m Scared of These Angles 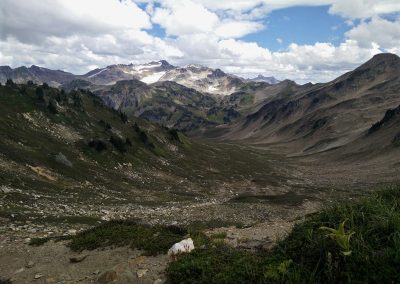