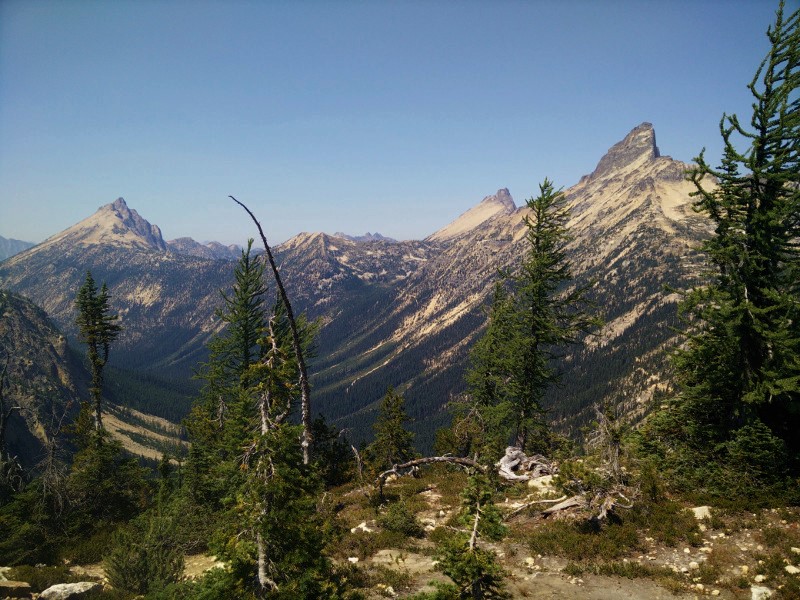 After breakfast dad and Marianne drove us up to the trailhead at Rainy Pass so we could make our final push north. On the drive up, we could see a new forest fire burning on one of the steep mountainsides to the east of the road. There was already a fire crew on it. Everything was so dry; I imagined every single lightning strike that had hit the forest during the storm had started yet another fire.

The plan was for Dad and Marianne to meet us at Manning Park in four days’ time. With half of Washington already on fire, they debated whether they would spend those days in the States, or back in Canada. With the new lightning strike fires we had passed on our way to the trailhead, they had decided to spend at least the day in the area, in case we got blocked by fire and were forced to turn around.

A few big hugs and “see-ya-soon’s,” and we were once again headed north. To get a flavor for the trail, dad and Marianne decided to take day hike south.

Maybe it was the smoke in the air, or maybe it was that we were only four days from Canada, but there was a definite sense of urgency as we made our way up towards Cutthroat Pass.

We arrived at the pass only five minutes behind Krav.

“The trail’s closed,” Krav said as we arrived.

“Dude, that’s not funny,” we responded.

“No, seriously,” he continued, “I was standing at the sign waiting for you guys when a ranger walked up and posted this.”

He pointed at a crisp white Fire Closure Notice.

“I asked him if that meant us too, and he told me that because I had made it past the sign before he posted the closure notice, technically we could continue. He just said, move fast.”

We had just squeaked by on a technicality, thanks to Krav’s fast pace. There was not one single second of hesitation. We had been denied once; we weren’t going to be denied again. We were going to Canada come hell or high water. We took a quick look over our shoulders and booked it past the sign and around the corner.

We were halfway to Granite Pass before we stopped to have lunch in the shade of a cliff face. From our lunch spot, we could see the billowing smoke plumes of two separate fires burning off of nearby mountainsides.

Where these the fires that had just closed the trail?

The fires were a safe distance away, but a steady breeze was blowing; we dared not sit for too long. Cramming the rest of our cheese and crackers in our mouths, we packed up, and we hiked hard and fast. Even with our late start, we made it over twenty-one miles by nightfall. We weren’t messing around.

Exhausted, and with throats raw from breathing smoke all day, we crawled into bed and went to sleep. 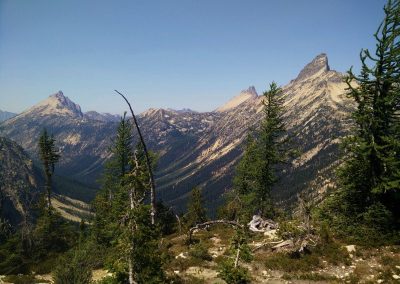 Looking Back Towards Cutthroat Pass 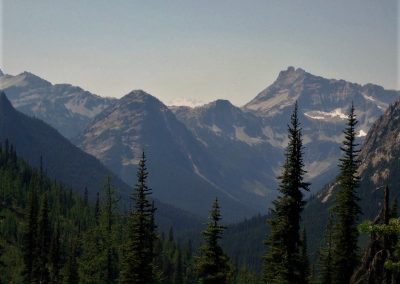 South, from near the top of Cutthroat Pass 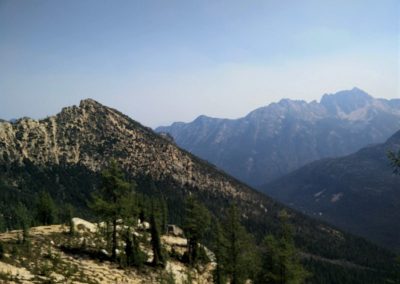 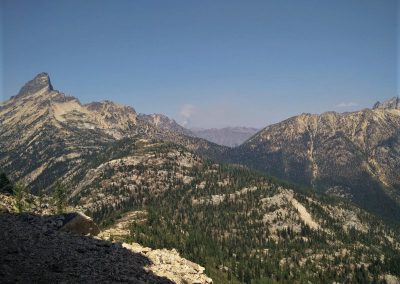