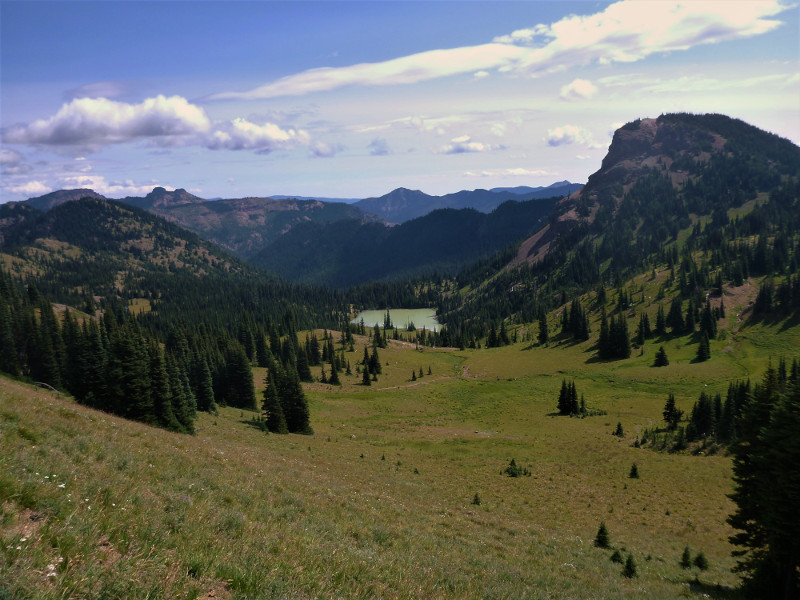 We were up at literally the crack of dawn, watching the alpenglow sneak down the talus slopes of the mountains behind Sheep Lake. I guess that’s what happens when you arrive at camp in the middle of the afternoon, take a nap, read a book, pick some huckleberries, take another nap, annoy a few thru-hikers, take a third nap, eat dinner and then go to bed at eight o’clock because there isn’t anything else to do.

Taking the tent down as quietly as we could, we packed up and headed out. The plus side of leaving camp early was that we made the climb to Sourdough Gap without even breaking a sweat. Behind us, we could see past Sheep Lake, where backpackers were just starting get up, across the verdant valley below Naches Peak and all the way back to Goat Rocks where we started five days ago.

Ever since we got off the trail, I have this weird obsession with distances and walking. Literally every single time someone mentions a distance, the first thing I do is calculate how long it would take to walk there. It’s borderline Obsessive Compulsive.

The horizon I have discovered is almost always a four to five-day walk. A friend will tell me they’re going to Portland for the weekend and I immediately think, “You could walk to Portland in less than two weeks.” Then, I plan the route. From my couch to PCT Mile 1,976 is exactly twenty-five miles. From there, it’s 168.4 miles to Cascade Locks along the trail, then another 43.3 miles from Cascade Locks to Portland along the Columbia River. If you averaged twenty-two miles a day, it would take roughly eleven days to get there, and you’d arrive just in time for Happy Hour. Would it be practical? Absolutely not! Would it be fun? Hell yeah! Is this part of the reason people think I’m insane? Maybe. Yes. Almost certainly.

From the top of Sourdough Gap, the trail hugged the hillside for nearly two miles as it worked its way towards Bear Gap. In the valley far below us, the forest gave way to lush green meadows surrounding a lazy creek. From Bear Gap, we could see the barren runs of the Crystal Mountain Ski Area.

We took our first break on a sunny boulder in the crook of a wide switchback, where the nondescript Union Creek Trail joined the PCT. The Union Creek Trail was obviously not that popular, as it wasn’t that wide and there was only one set of tracks leading down it. Not expecting any company, we spread our legs out across the trail.

Bearclaw and I hadn’t been sitting there for five minutes when a young girl in her early twenties came up the Union Creek Trail towards us.

“This isn’t the PCT.” She said smiling and shaking her head. “I got lost for like an hour down there before I realized it!”

Pulling our legs in so she could get past us, we watched as she stood at the switchback for a moment, looking left and then right. Uncertainly, she pointed to the left. “Um, that’s south right?”

“I’m SoBo’ing.” She said. “This isn’t the first time I’ve gotten lost. I didn’t even see the bend on the trail!”

I looked over at the PCT, trampled by hundreds of shoe prints that somehow all went around the big wide curve. Up and down the trail, I could see the familiar PCT Symbol nailed to trees and posts. Meh, she’d probably been deep in thought or something.

“Maybe you need to download the Halfmile or Guthook app onto your phone. They’re great for figuring out where the trail is.” We suggested.

What the Hell-O Kitty?! How the BLEEP do you expect to hike across the entire damn country without a map? Or a GPS? Or a compass? Or a phone App? I get that the PCT is fairly well marked but come on! How do you know what your mileage is? Or how far you are from food or water? Or where your nearest exit is if something goes wrong? Heck, what do you read at night when you’re really bored?

As we watched her bound off down the trail, Bearclaw looked at me in disbelief. “How do you not have a map?”

Standing up to leave, I shrugged my shoulders. As a control freak, I had no answer for this.

A mile or so up the trail, we rounded Bullion Basin. How do I know it was Bullion Basin? Oh, I carry this crazy piece of paper with squiggly lines and words and shit on it that lets me know these things… Mind boggling, I know. A quarter mile ahead of us, we could see two rogue horses charging off down the trail, a dusty cowboy chasing after them. A cowgirl was just picking herself up off the ground, and two dazed thru-hikers were standing twenty feet off the trail beside her, wondering what had just happened.

“You all right?” Bearclaw asked the woman as we approached.

“Oh yeah!” She assured us as she wandered around, collecting random pieces of tack and camping gear off the trail. If I hadn’t seen the horses run off, I probably would have concluded from the debris field that they’d exploded all over the trail.

“Our horses don’t like backpackers. I thought for sure those guys were far enough off the trail, but I guess not. If you see our horses up the trail, would you mind taking off your backpacks and waiting for my husband to show up?”

As it was, we didn’t see the horses, or the cowboy, for almost two miles. The cowboy, sweating and out of breath, had them tied to a hitching post at the top of Scout Pass. They’d made it almost all the way back to camp at Basin Lake before he’d caught up with them. He insisted they were tied up tight, but Bearclaw and I made a hundred foot arch around them just in case.

Putting a few more miles between us and the hikertrash prejudiced horses, we finally stopped for lunch and a short nap in the sun-kissed meadows of Little Crow Basin.

Our afternoon was a complete snooze-fest. With the spectacular scenery of Goat Rocks and Mount Rainer behind us, the forest seemed less exciting than ever. It didn’t help that long stretches of trail were covered in blowdown that slowed us down to a crawl. It wasn’t that we had a bad afternoon— it just wasn’t all that exciting, and because it wasn’t all that exciting, my legs ached, and I was tired.

It was evening, and the sky had clouded over and was threatening rain by the time we made it close to our intended camp, just off the trail near a small spring.

We climbed into bed as the first drops of rain spattered down on the nearby rocks, and I happily fell asleep reading my trusty maps.

One of My Favorite Views 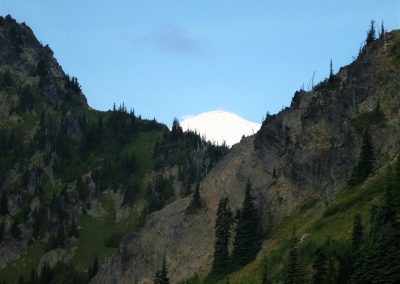 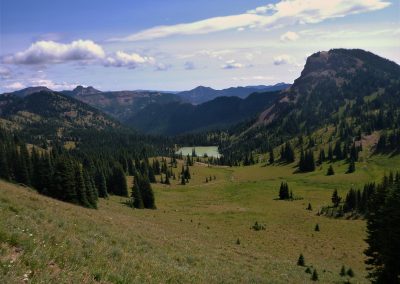 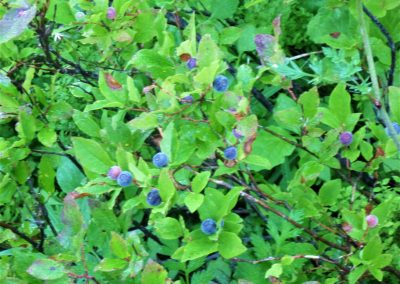