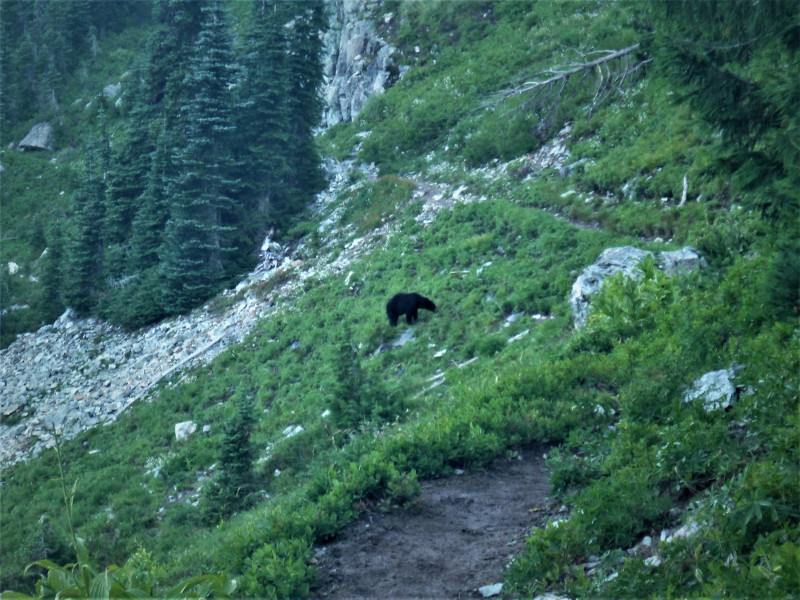 When we’re hiking, Bearclaw and I like to discuss our ideal bear sighting. We have this bucket list thing about wanting to spend a good fifteen minutes watching a wild bear doing important bear stuff out in nature.

We’ve seen a handful of bears on trails in the past, but somehow they never fall into our “ideal” sighting parameters. The thing with bears is that the excitement level rises exponentially the closer the bear is to you. Most of the bears we’ve seen have been so far away that they’re just a black fuzzy dot and watching them was about as exciting as staring at the period at the end of a sentence. On the opposite end of things are the really close encounters which are so exciting that you suddenly wish you’d packed a spare pair of shorts. The key to the perfect bear sighting in nature is being in the “Goldilocks” zone: not so far away you can’t make out the actual shape of the bear but not so close it is massaging your head with its teeth.

Up before the mosquitos, we ate breakfast, packed up and hiked back up the washed out joiner trail that connected Two Lakes to the PCT. The trail continued to climb up and over a tree-lined saddle and back into Mount Rainer National Park where it hugged the east side of a steep, huckleberry draped mountainside. In no rush, I alternated between snapping photos of a spectacular white-capped Mount Rainer glistening under a cloud-free sky and eating all the huckleberries within arm’s reach of the trail.

Popping around a slight bend, I looked ahead just long enough to see a massive black bear blocking the trail a hundred yards ahead, happily sucking the bushes ahead of us clean. I hadn’t expected to see a bear eating breakfast on the trail! Surprised and not even thinking, I involuntarily spun a 180 and ran smack into Bearclaw’s chest.

“Well don’t run,” Bearclaw said looking at my wide, surprised eyes and peering over my head to see if he could spot the bear himself.

I hadn’t planned on running, just walking very quickly in the opposite direction until my slow little brain had time to process what it had just seen and give the rest of me instructions to calm the *bleep* down. Turning back around, we snuck round the bend to see if the bear was still there. Not only was he still there, but at a good hundred yards away he was in the “Goldilocks” zone.

“Do you think he knows we are here?” I whispered.

The bear looked over at us in a way that clearly said, “Can’t talk. Eating.”

“Yup. He knows we are here and from the looks of it, he doesn’t care.”

We finally got to knock and “ideal” bear sighting off our bucket list! It turns out, fifteen minutes is about as much bear watching as we could take before we got bored and kind of wanted to move on. The bear, however, was not done eating breakfast and no matter how much noise we made, refused to get off the trail.

We’d just resigned ourselves to the fact that we may be stuck in that exact spot for hours when a solo thru-hiker cruised up behind us.

“There is a bear on the trail.”

“What?! Cool.” He said, whipping out his camera and snapping a few photos.

“You thru-hiking? What’s your trail name?” We asked.

“Yeah. I’m Bambi.” He answered back. “How long have you guys been here?”

“Oh, a good twenty minutes.” We responded. “He’s not too into moving.”

Bambi looked at us, processing what we’d just said before saying the most thru-hiker thing ever.

“I don’t have time to stand here all morning. I need to make miles.”

I smiled inside, wondering how many times those exact words had come out of my own mouth during our thru-hike. If thru-hikers had a slogan that would totally be it!

Bounding off ahead of us, Bambi fearlessly charged down the path, waving his trekking poles and yelling at the bear. He was thru-hiker on a mission. Not even a hungry bear was going to stop him from getting to Canada.

Startled by a Bambi, the poor old bear raced off up the mountain as fast as scared little legs would carry him.

Following Bambi up the trail, we talked about all things thru-hiking. He had been hiking with his girlfriend until somewhere in Oregon when she’d had to get off the trail to return to school. Since then, he had been hiking solo. He seemed glad to have someone to talk to, even if it was only briefly as Bearclaw and I struggled to keep pace with him. At Anderson Lake, he broke off to have a mid-morning snack with another thru-hiker, and although Bearclaw and I were sad to see him go, we were happy to slow back down to a manageable speed.

Just passed Anderson Lake, we hiked back out of Mount Rainer National Park and followed the trail down into the wild flower-filled meadows that led to Dewey Lake. Only three miles from Chinook Pass, Dewey Lake was obviously a popular destination, and it wasn’t hard to see why, the cerulean blue waters tranquility lapped at grass-lined shores, shaded under a thick stand of pine trees. It was a quintessential alpine lake. And to top it all off, it was berry season.

Hurrying up the mountainside behind Dewey Lake and around the stunningly picturesque Naches Peak, we found ourselves in the parking lot at Chinook Pass, just in time for lunch.

When we’d hidden our resupply a few days earlier, there had been two cars in the damp, foggy parking lot. Now, it was like Disneyland! Hungrily, we raced up the trail, praying no one had discovered our secret cache. It was exactly as we’d left it.

We sat down alongside the trail and feasted on burritos and the two sodas I had hidden in the resupply as a surprise for Bearclaw.

Loading our full bear canisters into our packs, we made the long climb out of Chinook Pass to Sheep Lake.

Still early, we settled into another lazy afternoon of Walden and berry picking and watched the thru-hikers power up the hill next to our tent on the final leg of their long journey to Canada.

We tried to talk with them, but they didn’t have time to stand around talking to a bunch of section hikers all afternoon. They needed to make miles. 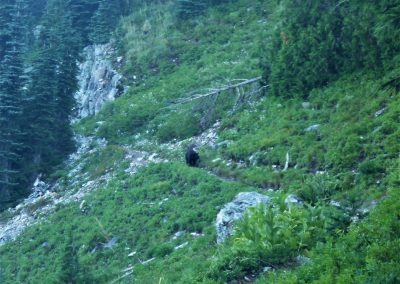 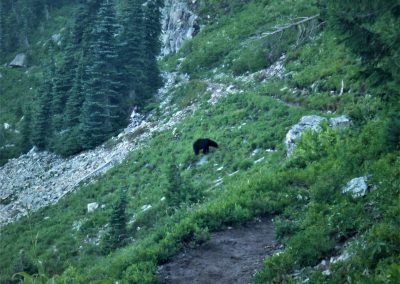 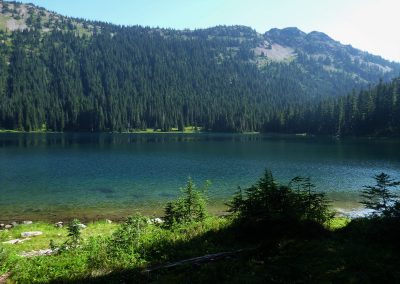 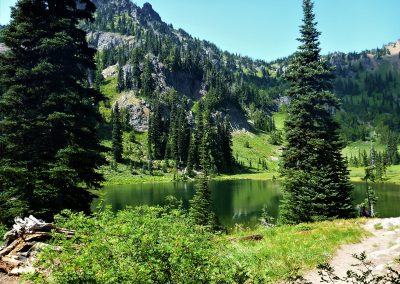 Home for the Night at Sheep Lake