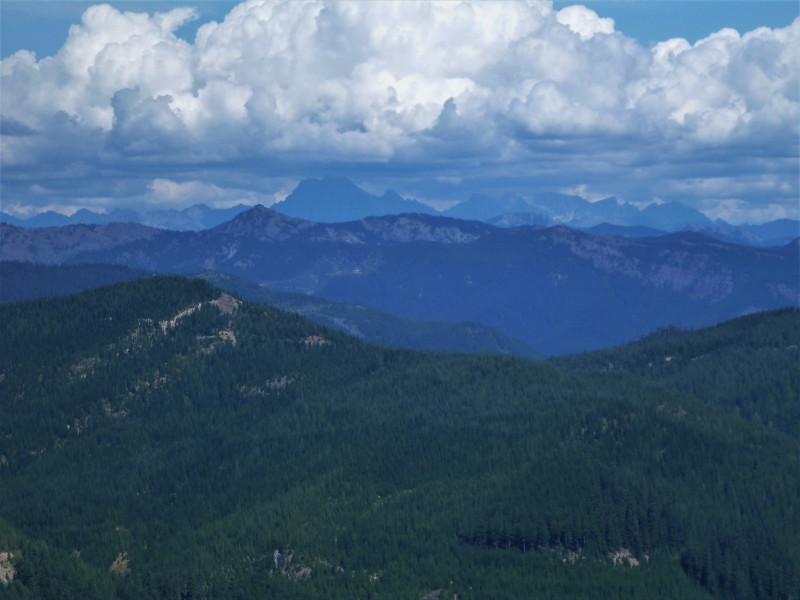 The weather was perfect for hiking. There was barely a cloud in the sky as we packed up and left our campsite in the huckleberry patch and by the time we were halfway up the climb to Blowout Mountain, it was warm enough to stop and pull off our jackets. The views were spectacular, behind us Mount Rainer was still visible, though it was much further away than it had been three days earlier. Ahead, we could see a series of jagged peaks, jutting into the sky like a row of wolf’s teeth.

“You think those mountains are in Glacier National Park or is Glacier still too far away?” I asked Bearclaw.

“It’s probably the Cascades on the far side of Snoqualmie. I bet the PCT goes right through them. They look freakin’ spectacular.” He answered.

It turned out Bearclaw was right. I’d read somewhere that you can see nearly a hundred peaks from Blowout Mountain. The ones we happened to be looking at were likely some combination of Mount Stewart, Mount Daniel, Overcoat Peak, Bears Breast Peak and Chimney Rock. I didn’t really care what they were called; I just wanted to see them up close. Our desire to get off trail in Snoqualmie had started out at zero. Now that we were closer, it was even less than that.

Along the ridgeline at the top of Blowout Peak, we ran into a thru hiker in his late forties. Within five minutes, he had explained to us that he was aiming for a forty mile day so that he could be in Snoqualmie before the bars closed because he was in desperate need of a drink. He had been granted time off from work to deal with his alcoholism and figured the trail was as good a place as any to sober up. His tactics were simple, he would binge drink at resupply points, then hit the trail dry and maintain sobriety on all the days in between. He admitted that this didn’t work all that well in Southern California, where resupply points were close together. The further north he went, however, the farther apart his opportunities to drink became and at this point, he was spending a lot more time sober than he was drunk. By the end of the trail, he was hoping to have fully recovered. Personally, I was having a hard time deciding if this was the craziest thing I’d ever heard or the most genius. At the end of the day, my opinion was of no consequence, as long as it worked for him, that was all that really mattered.

He had barely finished his story when a Sobo joined us. A professional truck driver and mother in her mid-thirties, she’d recently read “Wild” and was south-bounding Washington State in the hopes of having her own epiphany. To say she was abrasive and opinionated would be putting it mildly. She went off on a tangent about how every other thru-hiker she had met on the trail had been a complete idiot and how the State of Washington should issue more bear permits to completely annihilate the bear population.

Her rant reminded me of something my mentor Gloria used to say. If you consistently have the same problem with people or you find the same fault in everyone you meet, the problem isn’t them—the problem is you, as you’re the only common denominator. In my own life, this advice had proven true time and time again. I thought briefly about sharing Gloria’s words of wisdom because I knew for a fact that every other thru-hiker on the trail wasn’t a complete idiot, but I had a feeling this wouldn’t be well received. She wasn’t a lot bigger than me, but she was feisty, and I was a ninety percent sure she would respond by punching me in the face. Instead, I crammed berry after berry in my mouth until it was so full that I looked like a chipmunk and the words that wanted to come out, simply couldn’t.

When she asked the NoBo about water sources up the trail and then explained to him why he was wrong, even though he had just come from that direction, Bearclaw and I decided it was time to split. Wishing them both the best, we hastily made our exit.

When I try to come up with descriptive words to describe the rest of our day, the word boring comes to mind, but that denotes that we weren’t doing anything and we were, we were hiking. Maybe underwhelming and lackluster are better adjectives.

The trail wandered in and out of overgrown clear cuts and second growth until about a mile before Tacoma Pass, where it finally entered an old growth forest. Bearclaw and I wandered off trail only once, to collect water from a coursing spring that bubbled out of the hillside and wound its way through the trees.

The only other noteworthy things we saw were a lovely little campsite next to trickling creek just past Sheets Pass and the expansive views up the valley from the backside of Bearpaw Butte.

Around three, we finally made it to what was marked on our map as “spring, spongy ground.” With nowhere flat to camp, we walked another quarter mile until the PCT crossed a disused forest service road.

“How about this? It’s flat.” Bearclaw asked.

The road was relatively flat, so with numerous options as to where to set up, the only real question was fly or no fly? The sky, mostly blue with a few massive grey clouds accumulating on the horizon, looked like it could go either way. We set up without it and tucked it next to the tent just in case.

If it hadn’t been for “Walden”, I may have died of boredom waiting for bedtime… 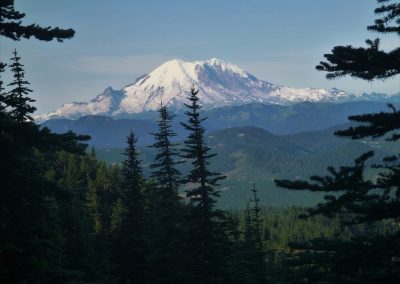 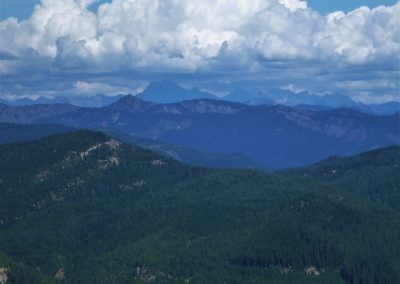 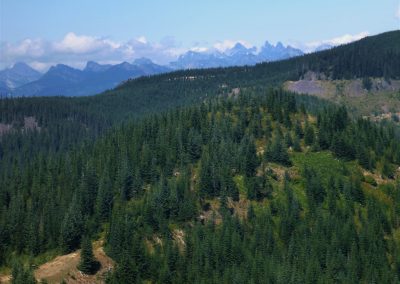 What Were These Peaks? 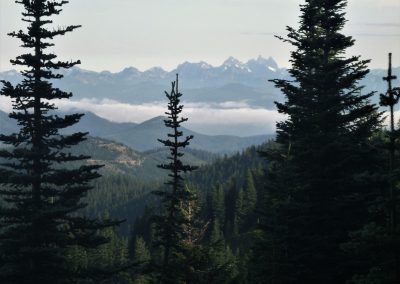 Was the PCT Headed Here?