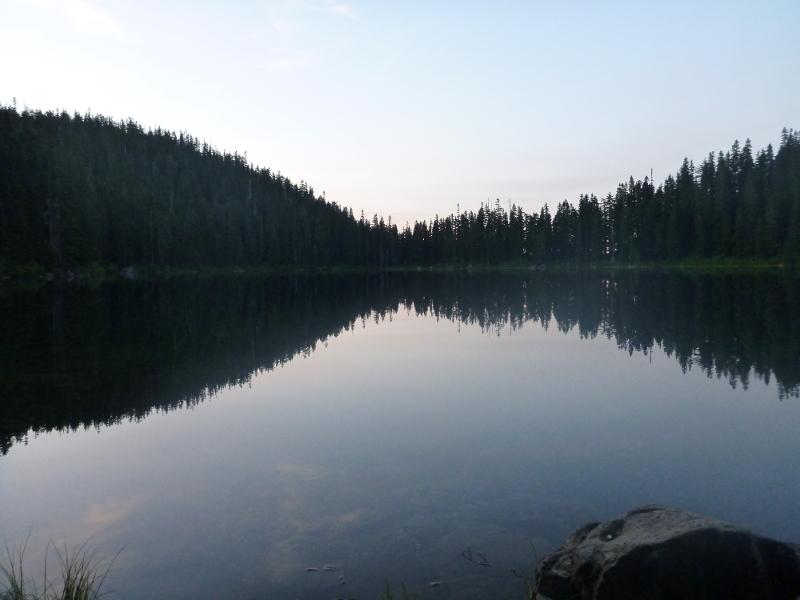 Barely awake I rolled over and open my eyes just in time to see a horizontal flash of lightning streak overhead.

I rolled back over and quickly put in my contacts and grabbed my headlamp in preparation of having to bolt outside and toss the rain fly on the tent before everything got wet. Once again able to see, I rolled back over and looked up at the sky. No rain, no clouds, just a million stars strewn across the sky like a handful of glitter on black construction paper.

“What’s going on?” I asked confused.

“I just saw a UFO!” Bearclaw responded, totally freaked out.

“I just saw a UFO.” He repeated. “There was a low rhythmic pulsing sound that woke me up. As I lay there listening trying to figure out what it was, it morphed into the sound of a small propeller aircraft, but it just didn’t sound right. It sounded like a bizarre recording, or like someone trying to play a sound they thought an airplane would make. It was so weird that I got up to see where the sound was coming from and a few hundred feet above the tent was a white, brilliantly lit orb. It totally freaked me out! When I shouted, “Oh fuck!” it shot off to the north at lightning speed. It literally covered the distance to the horizon in a millisecond. And then there were rapid flashes of light on the horizon where it disappeared.”

I guess that explained the lightning I thought I’d seen. Kind of.

Clutching our headlamps, we stared off into space for a long while before we finally fell back to sleep.

“Maybe it was ball lightning?” I suggested over breakfast.

“Saint Elmo’s Fire?” I offered as we got back on the trail.

“It wasn’t that either.” Bearclaw sighed. “I wish you would have seen it.”

“An airplane flying at a weird angle? A meteor that was coming straight at us, so it didn’t look like it was moving, but then it hit something in the atmosphere and veered off wildly in a different direction?” I tried.

“Something military? There’s a base near Seattle.” I suggested a while later.

It wasn’t that I didn’t believe him; Bearclaw isn’t the kind of guy that over-exaggerates or makes things up. It wasn’t even that I didn’t believe in aliens. I just found it a little disconcerting that a UFO was hovering above our tent watching us sleep. Seemed like a really weird thing for aliens to do. Why not attack New York, or abduct people for anal probing, or fix our environment for us? If you can master warp speed, you can probably solve global warming. But traveling light years to watch hikertrash while they slept in their tents? That was just plain creepy. Weird, creepy, stalker aliens.

We walked through the forest in silent contemplation, detouring only once to check out an abandoned weather station.

At Forest Service Road 52, we stopped in a sunny patch for morning break and chatted with a woman from Portland who was out for one final training run before she ran the Cascade Crest 100 the following morning. When we’d gotten off the trail in the fall, I was in amazing shape. Seriously, our PCT thru-hike was the only time in my entire life I’d ever had a nice ass. I swore I would never be out-of-shape again. But I also didn’t want to give up eating like a thru-hiker. The solution?

Within months, I’d gotten up to about nine miles a day. And then, I came down with a chest cold that knocked me on my ass. When I finally started running again, I was back down to a painful three-mile walk-run.

“Ugh, screw this. I’m too tired for this shit.” I thought. I was halfway thru my second walk-run when I promptly turned around, headed home and gained a good twenty pounds. I had nothing but respect for this woman.

Speaking of gaining twenty pounds, have I mentioned how thick the huckleberries alongside the trail were? I think I ate twenty pounds of them a day which was amusing because digestion did nothing to alter the color, and it turned out Trenchstar was right when he said Mountain House dinners made you poo look like soft-serve! The berries had a worse effect on Bearclaw then they did on me. Before long, he had to duck back behind the bushes, leaving me to happily continue shoveling berries down my throat.

Bearclaw hadn’t been gone for long when a dozen men with backpacks, hiking quickly in a single file passed me by. They were built like linebackers, were all sporting crewcuts, and were obviously on a mission. Had they not been in civilian clothes, I would have pegged them for Army men. The day just kept getting stranger.

“You don’t think it’s odd that last night I see a UFO and then today you see a bunch of guys that look like military men masquerading as civilians headed in the same direction the UFO went?” Bearclaw asked.

“A little, I guess. Or maybe they were just the Seattle football team out for a weekend backpack, in the middle of the week.”

A few miles later we arrived at a small seasonal creek, marked on our Halfmile maps as WA2388. Sitting on the banks of the creek were a dozen more buzz-cut linebackers in civilian clothes. A few of them were filtering water into army-green canteens with heavy duty water filters. A few of them were resting in the shade. To our right, two men were standing just off the trail. One of them was holding a large case. The other was holding what appeared to be a miniature satellite dish, which was attached the case by a cord. They seemed to be scanning the air for something. When they saw us, they all stopped what they were doing and stared.

“Are those the “football” players you saw?” Bearclaw asked.

“Nope. The football players I saw were headed in the opposite direction.”

“Those guys were totally military. What do you think they were scanning for? I bet it has to do with whatever I saw last night!” The plot thickened.

“They were probably looking for Bigfoot.” I winked. But seriously, strange things were afoot in the forest.

The further away from the UFO site we hiked, the less strange the trail became. We hopped over three creeks as we wandered through tranquil forests of towering pines and bare hillsides thick with sickly sweet berry bushes. We stopped and chatted with a trail crew and thanked them for their hard work.

Late afternoon we made our way down a steep hillside towards the shallow, grassy Twilight Lake. We had decided earlier that either Twilight or Mirror Lake would be our home for the evening and since Twilight wasn’t that exciting, we opted to continue one. Mirror Lake was stunning— a deep, reflective pool of water tucked up against the talus and rock cliff face of Tinkham Peak. Where the PCT met the lake at the outlet, a small waterfall tumbled into the valley below. Stretched around two-thirds of the lake was forest, littered with dozens of campsites.

We worked our way through the forest and around the lake, finally coming to a stop at a small site near the talus-strewn face of the peak. The setting sun outlined the edges of the gathering storm clouds in bubblegum pink as we polished off our last Mountain House dinner and what was left of a once full bottle of Frank’s hot sauce.

We crawled into bed just as the first drops of rain began to fall.

“I hope that UFO doesn’t come back again tonight,” Bearclaw said seriously as he nodded off to sleep.

I wasn’t worried; somewhere out there was an entire forest of Bigfoot hunting linebackers ready to chase it off. 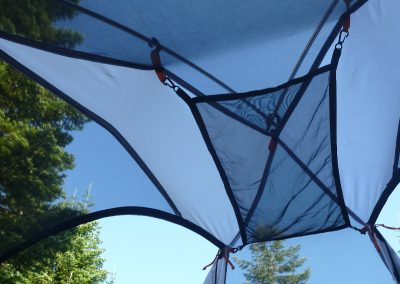 Carl Saw his UFO From this Tent… 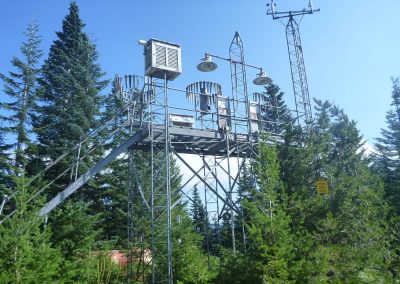 A Weather Station… Or is it? 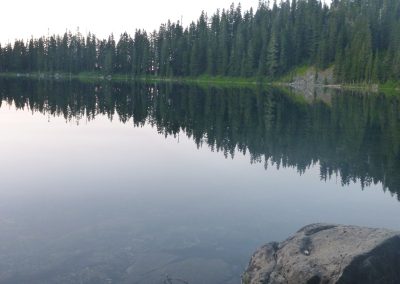 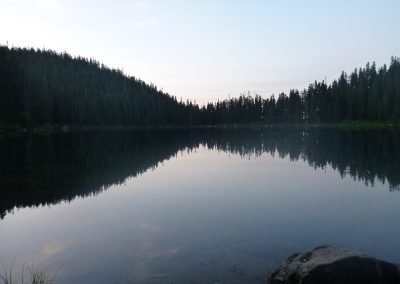