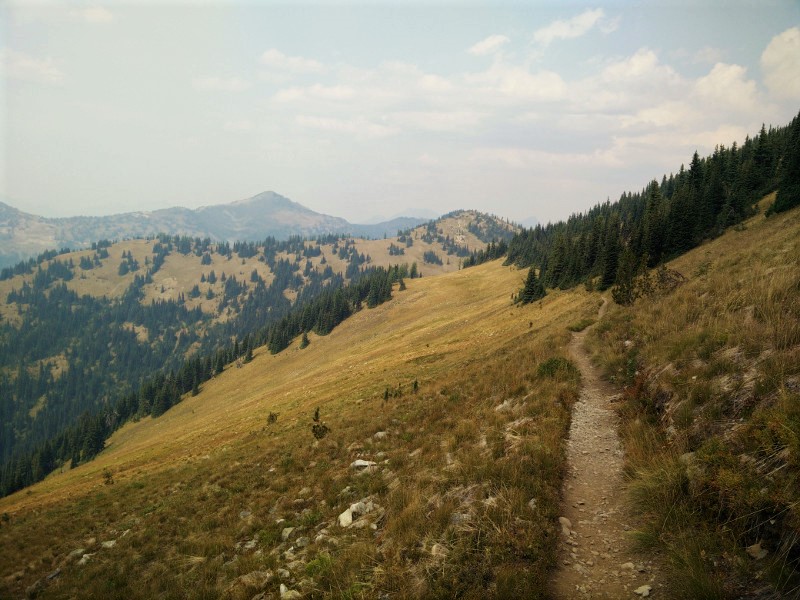 Sometime after dark, I was awoken by the snapping of branches. The air was thick with smoke. For a brief moment, my half-asleep brain thought the branch snapping was the crackling of fire. Eye’s wide open; I fully expected to see the glow of embers burning outside the tent.

But there was no glow, and the twig snapping was just a noisy deer, whose eye’s reflected like headlights in the beam of my headlamp. For the first time, it dawned on me that, in our haste to get to Canada, we had not so much as looked at the fire closure notice at Cutthroat. We hadn’t asked anyone if we would be safe. We had no idea if the fire closure was due to the fires we had seen burning behind us, or fires that lie ahead of us. We had heard from the section hikers we were camped with that there was possibly another fire burning closer to Hart’s Pass. We also didn’t have a map big enough to show our exits.

I wasn’t scared; I just felt stupid. How horrible would it be for my poor parents to get a call that I was missing and presumed dead in a burning forest?

No, I reasoned, the ranger wouldn’t have told us we could continue if the danger had been imminent. They would have flat out said no and sent helicopters to rescue anyone ahead on the trail. The only helicopters we had heard all day were obviously firefighting. Besides, we knew where all the lakes, rivers, and streams were; if the fire was close, we could always go to water.

Feeling better, I went back to sleep.

In the light of day, our situation seemed less dire. The smoke was only as thick as it had been the day before, and our pet deer was still wandering around the campsite. Surely he would be running for his life if he felt he was in danger, animals had good instincts.

Five miles up the trail, we rounded a corner to see the entire ridgeline of Tatie Peak on fire. Standing off to the side of the trail, was a wildland firefighter. He informed us that the fire was currently a half mile squared, and had already burned 160 acres of forest since yesterday. The trail was closed as far as Hart’s Pass.

We asked him if we should turn back, or continue forward. He assured us the trail ahead was safe to travel. Tatie Peak was rocky, and there wasn’t enough fuel to burn, so long as the winds didn’t pick up, the fire was unlikely to breach the mountaintop. Just be quick, and don’t linger, he had added.

Helicopters buzzed low overhead. We did as we were told, covering the five miles to Hart’s Pass without stopping.

Happy to be at Hart’s Pass, and out of danger, we decided it was time for lunch. As we walked through the parking lot, a ranger walked out of the little cabin.

“Were are guys headed?” He asked.

“I’m afraid your hike is over for the season. Trail’s closed all the way to Canada.”

I wasn’t going to argue with the man; he was just doing his job. Washington was on fire; it wasn’t his fault.

“I need to go to the bathroom,” I mumbled to Bearclaw, and disappeared in the direction of the outhouse.

Bearclaw and Krav continued to talk to the ranger, while I fought back tears. We had tried so hard, only to be denied again.

“Pull yourself together H. Bird,” I thought. “This isn’t the end of the world.” But somehow, it felt like it was.

“We can go.” The boys smiled when I returned.

“What?” I asked confused. I mean, I’d only been gone like three minutes, and it had been a pretty solid “you’re done” when I’d left.

“What about the fires?” I asked.

“There aren’t any fire’s ahead, there just aren’t any exits between here and Canada, so they’re closing the trail as a precaution, in case the fires to the south get out of control. Get your pack, let’s go!”

I grabbed my backpack, we gave the ranger an excited wave good-bye, and we flew down the trail. A mile later, we stopped for water at a seasonal creek and decided to finally eat lunch.

“How did you guys convince that guy to let us go?” I asked Bearclaw and Krav.

While I had been it the washroom, Bearclaw had told the ranger about our being snowed out in 2013 and that now we were trying to finish, but that he guessed it just wasn’t meant to be. The ranger had asked where we had started from yesterday. Bearclaw and Krav had told him we’d started just before noon at Rainy Pass. He did the math. In twenty-four hours, we had covered thirty-one miles. There were only thirty-five miles left to Canada. If we needed to, we could be in Canada by noon tomorrow. That was what had convinced him to let us go. That, and the technicality that the sign had not yet been posted.

By midafternoon, the entire sky had clouded over, and a cold wind blew. By the time we neared Tamarack Peak, it had started to rain. The rain put our minds at ease about the danger of fire, and the need for speed. We found a semi-sheltered campsite and threw up the tents.

As we scrounged for twigs and branches that would make sturdy enough peg with which to storm pitch his tent, poor Krav wished he had splurged on the tent pegs back in Winthrop. But how were we to know?

It hadn’t rained in months, and now here it was pouring down on the parched earth. Snug in our tents, we weren’t about to complain… We were going to Canada. 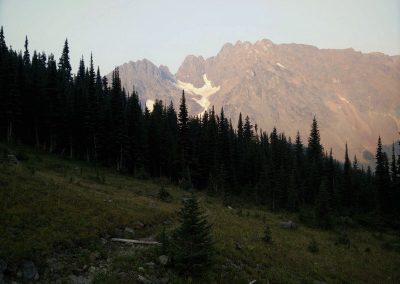 Looking Back Towards Glacier Pass 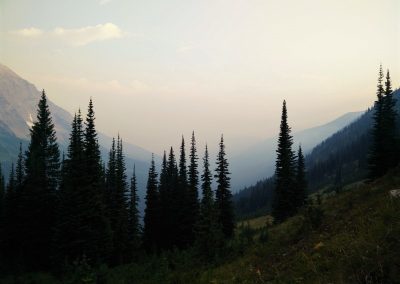 Looking ahead towards Tattie Peak 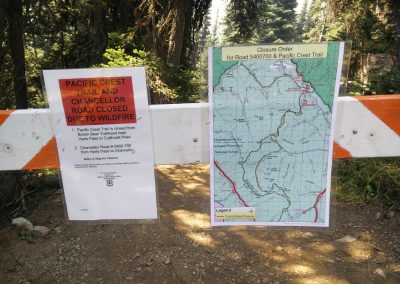 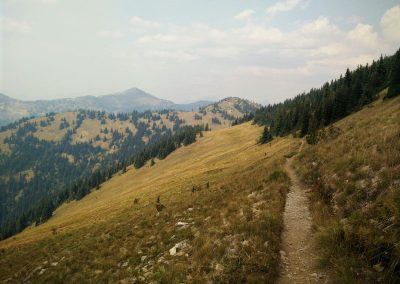