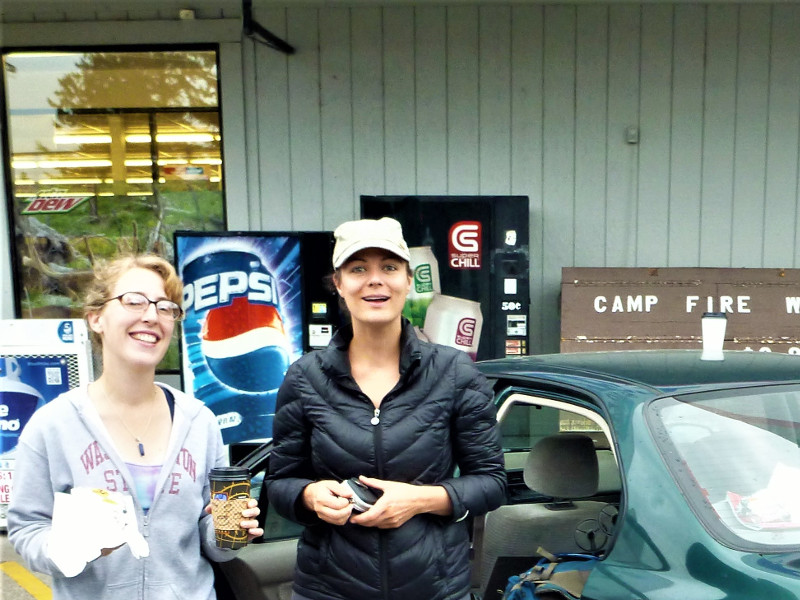 There is nothing worse than sitting at a desk just watching the digital numbers in the right-hand corner of the computer screen ever so slowly creep towards quitting time. Wednesday was pure torture. In fact, I’m almost positive the earth decided to rotate a fraction slower than normal, just to make the day drag out.

We left the house thirty-five seconds after 5 p.m. and didn’t stop until nearly dark, when we found a small campsite wedged between the East Fork of the Hood River and Highway 35, deep in the shadow of Mount Hood.
I wasn’t sure I’d be able to sleep— we were finally headed home; home to the PCT.

As it turned out, I wasn’t able to sleep but not because I was too excited. Sometime in the wee hours of the morning, I was jolted awake by a nightmare. Two aliens with long, knobby fingers covered with a paper thin layer of skin so thin I could practically see the blood coursing through their veins, had been pulling me out of the tent. Terrified, I’d grabbed both sides of the open door, trying desperately not to let them drag me into the cold, night. We were so close to being back on the trail, and I had no intention of letting anything stop us from getting there, least of all an alien abduction.

Eyes wide open and in full on panic mode, I took stock of my situation and was relieved to discover that I was still in my sleeping bag and not dangling out the tent door. It had seemed so real— the tent, the surroundings, everything had been exactly the same in my dream as it was in reality. The only thing missing when I looked around was the aliens. This suited me just fine. Had I opened my eyes and the aliens still been there I probably would’ve wet myself.

Speaking of wetting myself, I desperately needed to pee, but there was no way I was getting out of the tent and waltzing into an alien-infested forest to do so. Instead, I lie awake until dawn, thinking about how badly my bladder ached and wondering whether or not I remembered how to be a hiker. Could we hike fifteen mile days without dying? What if I forgot how to use our alcohol-fuel stove? Had I packed enough food and fuel? Or worse, what if it wasn’t the same? What if I’d spent all winter romanticizing the trail, turning it into something more than it was, only to set myself up for a week of complete disappointment? What if the trail life I dreamed of no longer existed? What if the magic was permanently gone? These thoughts scared me more than aliens ever could.

Back on the road, we ate a quick breakfast and made our way across the Columbia. Washington’s grey sky hungrily gobbled up the few patches of blue we’d seen from Oregon. I angrily shook my fist and silently threatened the moisture-laden wall of grey hanging overhead, “Don’t even think about raining on my parade.” One day, I will be the crazy old lady that yells at clouds and has full on conversations with trees.

“Are you ready to go?” My mom had asked me a few weeks earlier as I excitedly babbled on about getting back on the trail. “Where are you resupplying?”

“Honestly, I hadn’t really thought about it. It’s only a hundred and thirty-five miles.” I’d answered. I wasn’t trying to be cocky; the PCT had totally ruined my sense of distance. Before the trail, if someone had told me they were hiking a hundred miles, I’d have been like, “Holy shit! Are you daft?” Now, it was only a hundred miles. Two months after we’d gotten off of the trail in Packwood, I’d walked twelve miles round trip to the post office just to pick up the keys for our box. The postmaster thought I was insane. It hadn’t even crossed my mind I should drive.

“So, what? You’re going to carry nine days of food with you? I thought six was about the max you could squeeze into your food bags.” She questioned.

“Huh, I hadn’t really thought about that…”

She made a valid point. Thru-hiking, we would have done this stretch in five days. We would have had a four-day resupply in White’s Pass, where we would have made jokes about how awesome it was to have such a light resupply. Now, however, we weren’t in thru-hiker shape. Knowing this, we’d scheduled nearly nine full days to hike this hundred and thirty-four mile stretch of trail. This presented a bit of a challenge because there really wasn’t anywhere to mail a resupply.

The solution I’d worked out was for us to hide a resupply for ourselves at the rest stop near Chinook Pass on Highway 410. It was only a third of the way into our hike, but that was the best I could do.

We reached Chinook Pass early in the afternoon and waited for the few cars that were stopped near the restrooms to leave before we meandered nonchalantly up the foggy trail carrying two bear canisters crammed full of six days’ worth of food and fuel. Finding a downed log fifty feet up a nearby embankment, we wedged the canisters underneath and camouflaged them with bark and twigs.

“What if they aren’t here when we come back?” I worried, watching Bearclaw build a small rock cairn on the side of the trail so we would know where to turn.

“Well, that would suck.” He responded.

The whole detour to resupply ourselves took a lot longer than we’d thought it would and by the time we arrived at Dusty and Trenchstar’s place in Olympia, it was early evening. Tossing a few odds and ends in their packs the four of us were out the door and speeding towards Packwood.

We had planned to hike the five miles up the Snowgrass trail and spend the night at the PCT Junction where we’d made the fateful call to abandon ship during the storm but by the time we arrived in town it was nearly dark, and a light drizzle had begun to fall. Besides being a few degrees warmer, Packwood was pretty much exactly as we’d left it. Only this time, we weren’t racing winter to the border. There was no rigid schedule. No deadline.

With no need to hike off into the dreary darkness, we secured the last room at a hiker-friendly inn.
“I remember you.” The owner smiled. “You were with the guy from South Africa. What was his name?”

Flinging open the door of our tiny room, the four of us looked at each other.

“We got the bed last time,” Bearclaw responded without skipping a beat. “It’s yours.”

It was hard to believe it had been over a year since we’d shared a room with Dusty and Trenchstar, it felt like yesterday.

Blowing up my air mattress I made a nest in closet, my feet jutting out under the bed. Bearclaw crammed himself into the narrow space between the bed and the wall. Dusty and Trenchstar huddled up on the bed, trying to figure out how to get comfortable without one of them falling off. I smiled. It was just like old times. As I closed my eyes, it really felt as if no time had passed, like we’d never left the trail. Maybe the snowstorm had all just been a bad dream…

And, if we hadn’t all smelled so Downey fresh and clean, I probably could have believed it.