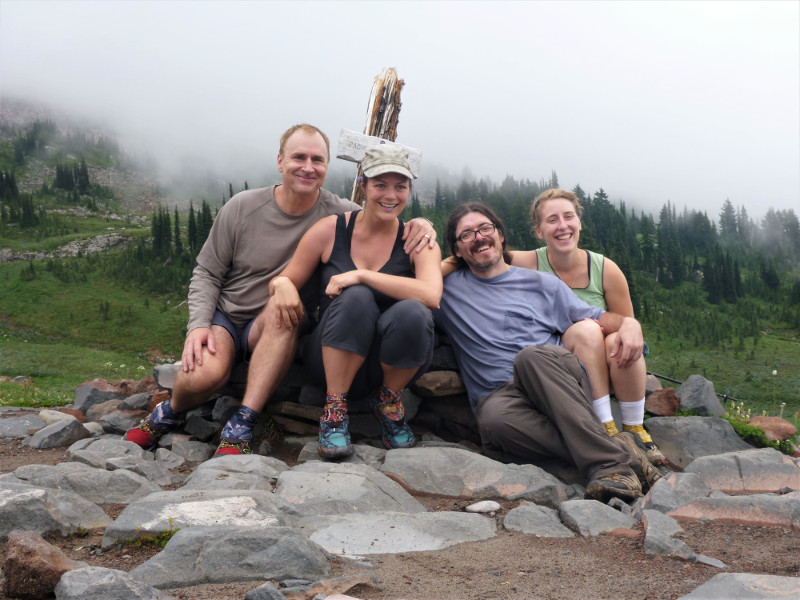 “Woah… How did you escape the sixties intact?”

We were raiding the grocery store for a quick and easy breakfast we could eat on our way to the trailhead when Trenchstar caught the attention of an old hippie. Dusty, Bearclaw and I stifled a giggle as Trench tried to explain to his new friend that he had unfortunately missed the sixties by at least a decade.

The hippie didn’t believe him for one second. He went on about LSD and 60’s music as if Trenchstar had time warped out of 1968 earlier in the morning and landed right smack dab in the middle of the grocery store. Looking at Trenchstar, an amused smile on my face, I could totally see the confusion. With his chest-length, curly black hair and his thick mustache, he had the timeless look of a philosopher-poet. Slap some bell-bottoms, a paisley printed dress shirt and a tasseled leather jacket on him, add a guitar and a flower garland for good measure, and you’d have yourself a bona fide hippie. We laughed about this all the way to the trailhead.

Snowgrass Trail #96 was a lot steeper than I remembered it being, or maybe I was just super out-of-shape. Either way, I was happy for the bumper-crop of blueberries that lined the trail because it gave me an excuse to stop every hundred and fifty feet to catch my breath. I mean, pick blueberries. Yeah, that! Fistful after blue fistful, we made our way up the mountainside.

Eventually, the trail led out of the forest and into brilliant green meadows brimming with wildflowers— orange Indian paintbrushes blended flawlessly with purple alpine lupine and white yarrow. All this was punctuated by puffy, ivory colored flowers that looked like truffula trees from Dr. Suess’ The Lorax.
None of it looked familiar, and it wasn’t until we stumbled upon a familiar sign, that I realized why. The last time we’d been here the entire meadow was buried under half a foot of snow. This was the meadow that enveloped the PCT at the Snowgrass Junction!

“I’M ON THE PCT!” I yelled in an ode to the Aussie we’d met back on our first day out of Campo. And then, in true hiker fashion, we plopped down under the sign for a snack.

“You think those guys are thru-hikers?” Bearclaw asked watching two northbound hikers headed up the trail towards us.

There was no doubt about it. Their smooth, long gait and perfect foot placement reeked of a oneness with the trail that only comes from hiking long distances. Not to mention the fact that they were hauling-ass. We were only twenty miles from White Pass. Today was definitely a town day for them; pizza was calling.

Within minutes, they’d spanned the gap between the edge of the meadow and us. They didn’t speak much English, just enough to let us know that they were German thru-hikers. They were so lean and fit; they probably could have snapped the head off a grizzly bear with their thighs. I wondered with a twinge of jealousy and sadness if that was how we’d looked by the time we’d arrived in Washington.

They gratefully accepted an apple and a handful of gummy worms, which they devoured in two bites and then, in the blink of an eye, they were gone, up and over Old Snowy.

Excited to finally be home, we packed up and eagerly set off up the trail behind them. I was 97% sure Old Snowy hated me. The higher up the mountain we climbed, the worse the weather became. It wasn’t a blinding snowstorm, as it had been the previous fall, but it was nearly as cold, and by the time we reached the Junction of the Packwood Glacier pack animal trail and the Official PCT, the clouds were kissing the hard packed snow.

Last summer, after they had gotten off the trail in Independence, Trenchstar had sectioned hiked from the Bridge of the God’s on the Washington/ Oregon border to Snoqualmie. Standing at the junction marker, he warned us that the last time he’d been there he’d gone up and over on the official trail and it was scary as hell. This year there was more snow. He also knew I would absolutely hate it, since my fear of heights rivals my fear of butterflies. He thought it would be in our best interest to try the pack route over the glacier.

The glacier hung steeply on the side of Old Snowy, though it was impossible to see more than thirty feet in any direction with all the cloud and fog. I wasn’t sure what was worse: being able to see the crazy steep drop-off that undoubtedly lay to my left, or letting my imagination decided what was behind the solid grey wall of fog. Trenchstar, Dusty, and Bearclaw led the way, with Bearclaw stopping to kick bigger steps into the slick ice and snow for me as he went. Stopping behind him at one particularly treacherous spot, the clouds parted for a brief moment, and I could see all the way down to the bottom of the glacier and over the cliff below it. Oh. My. God. Even my vivid imagination hadn’t been able to conjure up something that scary. My heart stopped beating for a good thirty seconds. My head began to spin. My knees began to shake. Maybe Old Snowy didn’t hate me after all; maybe it was saving me from being scared to death.

“Ahh! Cover it back up! I don’t want to see anymore!” I closed my eyes and pleaded. Opening my eyes, the thick grey clouds had answered me, and I was back to thirty feet of visibility. Ignorance truly is bliss.

No one had really mentioned the glacier would be scary. They always skipped that and went right on to describe the Knife’s Edge, the razor-sharp ridge-walk that followed immediately after you made it over Old Snowy alive. I wasn’t sure I could handle anything scarier than the glacier. Since we’d gotten off the trail, I’d sort of continued eating a hikertrash diet. My arteries were too constricted for scarier. I would almost certainly have a heart attack. Damn it! I’d always assumed if one of my fears were going to kill me, it would be death by moths.

Going over the glacier I had all the time in the world to turn the Knife’s Edge into the most foreboding and terrifying trail in the Universe. When we finally arrived, I was pleasantly surprised. The trail itself was wide and smooth in comparison to where we had just come from, and the views were cleverly hidden behind a curtain of mist. They parted only once— to reveal a mountain goat happily devouring grass alongside a scree field.

A few miles up the trail, the clouds began to break, and by the time we reached Elk Pass, there wasn’t a cloud in sight. Behind us, Old Snowy stood tall and defiant. Ahead, Mount Rainer sparkled under a flawless blue sky. The trail hadn’t lost any of its magic.

We’d been aiming for Shoe Lake, but the hike up Snowgrass and across Old Snowy had kicked our asses. By late afternoon, we decided on taking the first campsite available. Lutz Lake was full with a camp of exhausted thru-hikers lying on the ground outside of their tents. Tieton Pass was too small. Wearily, we continued on until we found a site big enough for two tents near the junction to Hidden Spring.

“Hot sauce is good with you guys, right?” Bearclaw asked as he unscrewed the lid from a fresh bottle of Frank’s. Getting the go-ahead from Dusty and Trench, he doused the pot of Smoky Mountain Paella in a healthy amount of hot sauce. Trenchstar laughed.

“I’d almost forgotten how much hot sauce you guys dump on everything! Whenever you guys borrowed our hot sauce on the trail, you’d use like half the bottle. It was kind of a point of contention.”

“Really?!” Bearclaw asked shocked, “Why didn’t you ever say anything?”

Trenchstar shrugged. “I guess we just liked hiking with you guys more than we liked the hot sauce.”

Instructions: I like to mix the diced sun-dried tomatoes, red pepper flakes, black pepper, dried garlic, and oregano together with the rice in a Ziploc bag before we head out on the trail, to help reduce weight and trail prep time.

At camp: Add rice, spices and olive oil to water and boil until rice is tender. (You can reduce cooking time by pre-soaking the rice for an hour or two.) When rice reaches desired doneness, add oysters (including juice), shrimp (including juice) and chicken. Douse in a healthy amount of a friend’s hot sauce and eat while hot. 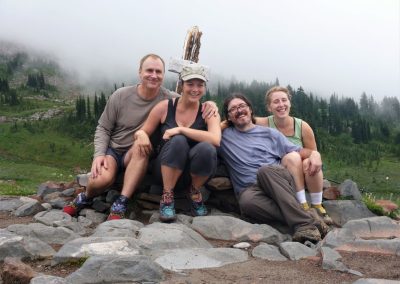 Reunited with the Trail 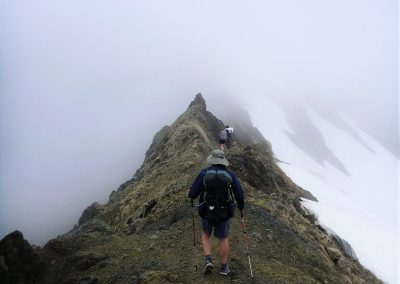 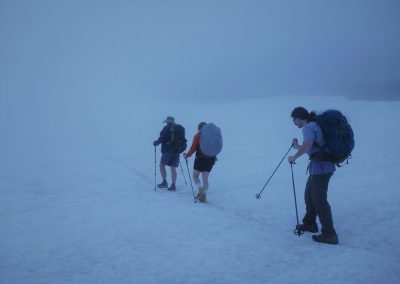 In the Misty Shadow of Old Snowy