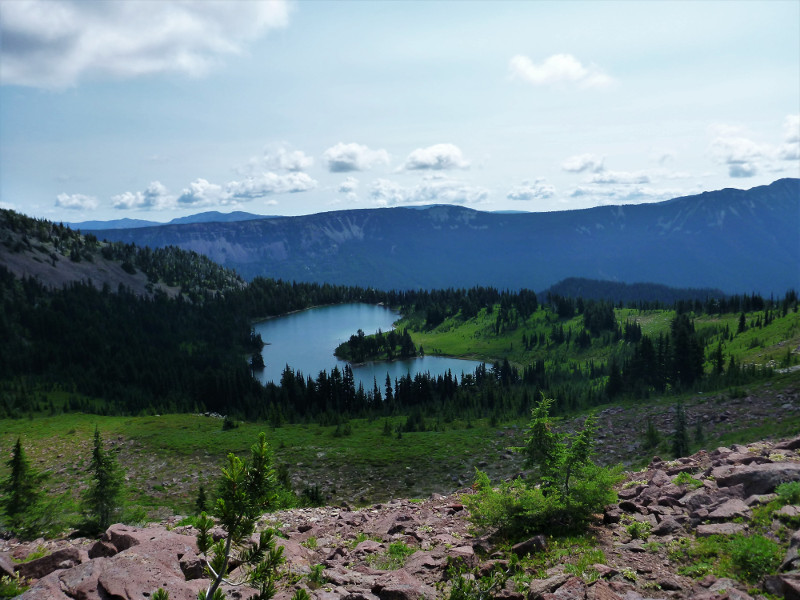 Dusty, Trenchstar and Bearclaw were all relieved I didn’t wake them up at the ass-crack of dawn so we could “be on the trail early.” When my eyes popped open at 5:30, I’d briefly considered deflating my air mattress as a joke, but somehow I think I’m the only one who would have considered it funny. It was almost 8 o’clock when I finally rolled over and unscrewed the valve on my NeoAir.

“Oh, there’s the alarm! She’s up!” Dusty joked from their tent.

Breakfast was a Mountain House Breakfast Skillet wrapped in tortillas with hot sauce.

“Ugh, Mountain House is so gross.” Dusty sighed. “That’s the only one worth eating.”

This didn’t bode well for us. Two-thirds of our meals were going to be Mountain House. I’d been lazy with our meal prep this trip because I’d been too busy with work to make my own. Costco had a whole box of Mountain House for fifty bucks. It was so easy. I’m only human! I caved in and bought it.

“It’s not gross!” Trenchstar assured us. “Dusty just got tired of it on the trail because we ate it at every meal for like a month. It does make your poo look like soft-serve ice cream though.” Wow! Now there was something to look forward too!

We hadn’t even been on the trail for an hour when we stopped on a saddle overlooking Shoe Lake for a snack. From high above, it looked more like a giant letter “U” than a shoe. Where the land jutted into the lake, we could see a few beautiful campsites nestled in the tall pines. We should have walked the extra couple of miles last night: it looked pretty sweet down there.

The trail past Shoe Lake was almost all downhill right into White Pass. We picked up speed crossing under the lifts of the White Pass Ski Area and didn’t stop until we popped out at the trailhead parking lot in White Pass. Next to the trail was a table full of people, sitting beside a BBQ. Trail magic!

“You guys thru-hiking? Want a hamburger?” The gentleman closest to the grill hollered over to us.

There are no words to express how badly I wanted to answer that first question with a “yes.” But I wasn’t a thru-hiker. And I really didn’t need a hamburger. I looked over at Bearclaw; it was obvious he was having the same dilemma.

“No. We’re just section hiking.” He sighed before quickly adding, “We thru-hiked last year but got shut out in Packwood by that big winter storm that hit mid-September. We’re just trying to finish up some of what we missed.”

Bearclaw looked at Trenchstar. Trenchstar looked at Dusty. Dusty looked at me. I looked at Bearclaw. We all wanted a hamburger, but those hamburgers were meant for starving thru-hikers and hungry section hikers, who’d been hiking more than twenty-four hours. We weren’t even hungry. In fact, the only reason I wanted a burger was to feel like I was part of the club again. And that’s when I realized how much our thru-hike had really meant to me. I’d never been prouder of myself for anything, ever and I desperately wanted that feeling back.

“Nah, we haven’t even hiked twenty miles yet,” Bearclaw finally responded. “Save them for someone that really deserves them.”

I could tell it pained him to say that, as much as it pained me to hear it.

Dusty and Trenchstar needed to head back to Olympia to work in the morning, so they’d left a car at the trailhead. Before taking off, they gave us a quick ride to the gas station to pick up a few snacks and a cold bottle of Gatorade. The store was crawling with thru-hikers.

“You thru-hiking?” A spunky girl in her early twenties asked as I exited the bathroom.

Feeling a little cranky I kinda wanted to be like, “I think it’s pretty obvious from my muffin top that I’m not.” But she was just trying to be nice, so instead I responded with, “We actually hiked in 2013! How’s your hike going?”

She informed me their hike was going really well, though they were trying to slow down and stretch it out as long as possible. I warned her not to stretch it out too long because September in Washington could be a huge bitch. She nodded in agreement but admitted that none of them wanted the trail to end. They weren’t ready for it to be over.

“No one ever wants the trail to end. No one is ever ready for it to be over.”

“Are the hiker blues really as bad as people say they are?” She asked.

“You have no idea,” I answered truthfully.

“Yeah, I was afraid of that. What are you trail names by the way?” She asked.

“I’m Hummingbird, and my husband is Bearclaw.”

“I’ve seen your names in registers all the way up the trail!” She said excitedly. I don’t think she had any idea but that totally made my day.

The trail out of White Pass wound its way around the backside of Leech Lake and into the Snoqualmie National Forest. The trail was wide with little to no elevation gain, as it wandered deep into the forest past a handful shallow lakes and ponds. We had every intention of camping at Sand Lake but when we arrived neither of us felt much like stopping. We were in hiker mode.

Arriving at Buesch Lake in the early evening, we set up camp in a flat site between the trail and the lake. As our Mountain House dinner rehydrated, I looked at our map.

“What? Are you sure?” Bearclaw looked as confused I was.

I recalculated the numbers.

“How the hell did that happen?”

“I have no idea. But I bet we sleep like the dead tonight.” I smiled. 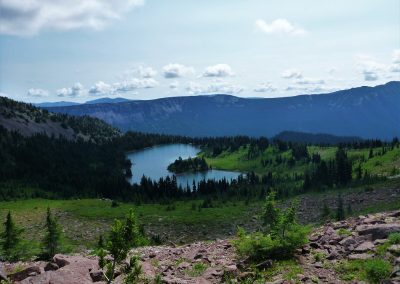 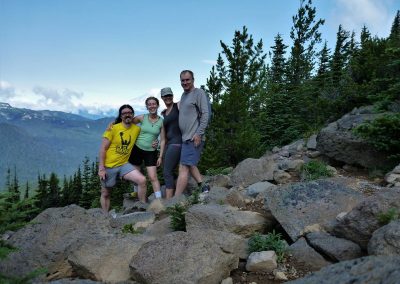 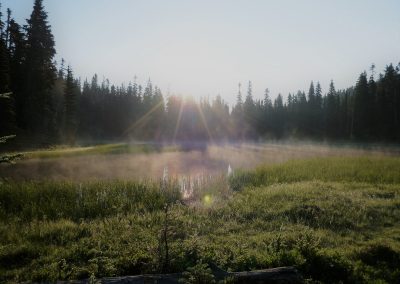