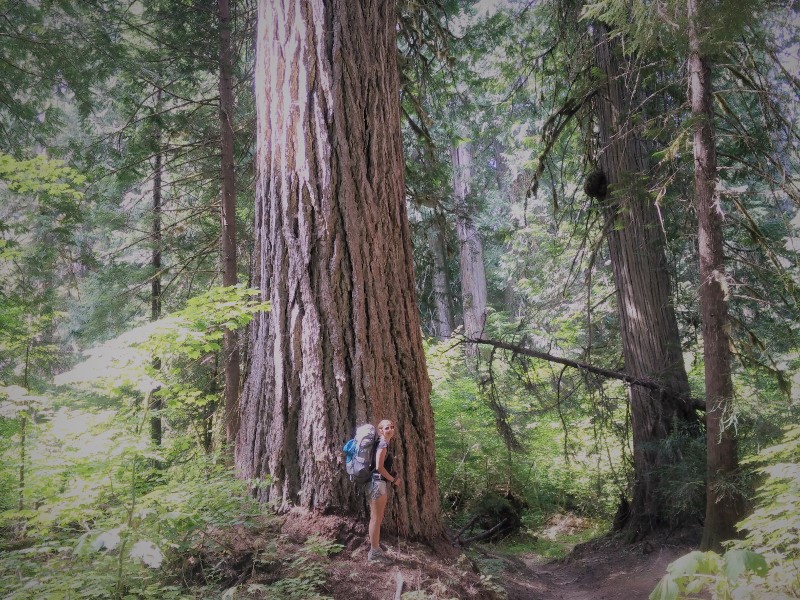 We woke up at sunrise, only twelve miles from our detour off of the PCT. I had mixed feelings about this; I didn’t want to detour from the PCT, Washington had already robbed us of getting to Canada in 2013, and now it was robbing us of the North Cascade National Park section of the trail and a “proper” finish. That felt selfish, but I had been waiting to finish the trail and see the Northern Terminus of the PCT for two and a half long years now. The other part of me was excited to see my dad two days early. Now that we were missing two days of trail, that meant we could spend more time with him and his wife, Marianne.

While breakfast cooked, I wandered around camp trying to snap photos of the pikas (or “furry burritos” as Krav called them.) It turned out that trying to photograph a pika was nearly impossible. Two dozen photos and only three of them contained a pika.

We were only a few miles into our morning when we came to a large grassy meadow at the base of a mountain. The trail curved all the way around it in a large arc, staying slightly higher than the meadow itself.

“There’s Krav,” Bearclaw said. Sure enough, Krav was way ahead of us, halfway around the arch.

“There’s a bear!” I said at virtually the same time.

I pointed to a large black dot roaming across the meadow below us.

“Krav!” We yelled. “Do you want to see a bear?!” But his headphones were in, and he was in his groove.

Bearclaw and I watched the bear as we circled the meadow. He was far enough away he didn’t pose a threat, and so we eventually stopped and watched him. Suddenly, movement caught my eye at the treeline on the far edge of the meadow. Another bear, this one with two cubs, had just stepped into the light. Four bears, in the same morning, in the same meadow!! We couldn’t believe it.

The mother and cubs weren’t in the meadow for more than a minute before she spotted the solitary bear, and she and the cubs turned and booked it back into the forest. All this trail action and Krav was missing it!

We watched the bear for a few more minutes and then left him in peace as we continued up the trail.

When we finally caught up to Krav at break and told him what we saw, he was understandably bummed. I tried to show him the photos I took, but tiny black dots aren’t that interesting. I wish I had a better camera!

The closer we got to the Suittle River, the bigger the trees grew. Soon, we were enveloped in the fairy world of ancient giants. I love old trees. Standing beneath them gives me a sense of calm. A sense of oneness with the Universe. A sense of how small and insignificant I am in the grand scheme of things, and yet a feeling I am an integral part of something so much bigger than myself that I cannot possibly fathom it.

“Hello old friend,” I smiled, running my hand across the rough bark of a particularly large tree. And I meant it; this tree was much my friend as anyone I had ever know.

Crossing the long bridge over the Suittle River, the forest spell was broken. We had arrived at our detour; a large white “Fire Closure Notice” nailed to the tree beneath the junction sign. And just like that, we were once again off the Pacific Crest Trail.

The eight miles to the Suittle River trailhead were beautiful; waterfalls tumbled down baren rocks, the green mossy banks and logs thriving in the spray. But, it wasn’t the PCT.

We arrived at the trailhead at the same time as a couple that had been out for the weekend. They were headed back to Seattle. We explained our situation, and without hesitation, they offered us a ride.

“Where would you like to go?” The woman asked us, as we piled into their van.

“We’re headed to Rockport,” I responded.

“Oh, you guys don’t want to go to Rockport,” she answered back. “There’s nowhere to stay, and it’s super meth-y.”

We laughed, but she assured us she was not exaggerating.

I looked at my map for the next nearest town in the direction they were heading.

“How about Concrete?” I asked.

“Um,” she hesitated. “We’ll drive through town and let you decided. It’s pretty Meth-y too.”

The Main Street of Concrete, Washington was all of two blocks long and had the disheveled appearance of a town that had once been quaint and semi-thriving, but then the major employer (concrete?) had left town and now, it was just a handful of stragglers hanging on by a thread. Besides the Pub, not a whole lot appeared to be happening in downtown Concrete. The Confederate flags draped in the windows of the homes we passed, did nothing to add to the aesthetic.

They ended up leaving us at a hotel in Sedro Woolley, the first community they felt we’d be “safe” in. Thanking them profusely, we wished them the best.

I called dad and changed our location yet again, and he, in turn, once again changed his route to accommodate us. They would meet us at noon the following day, at the coffee shop across from our hotel.

Showered, clothes in the washing machine downstairs, we ordered pizza, and turned on the TV. 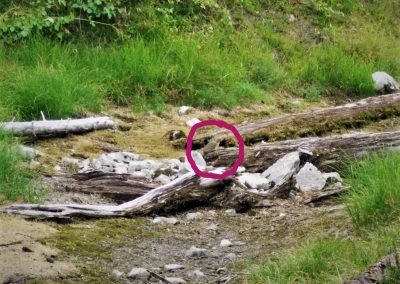 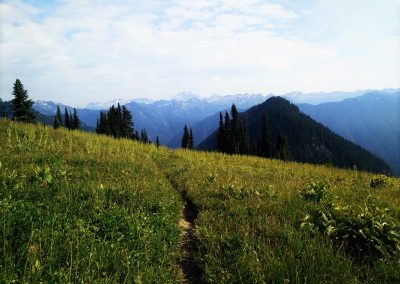 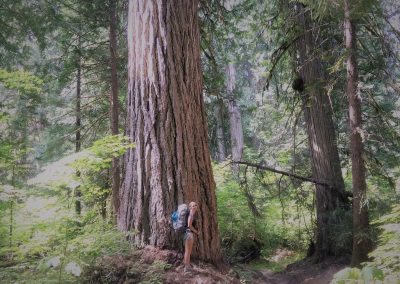 At home with the giants 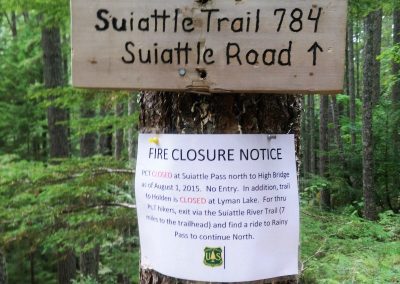