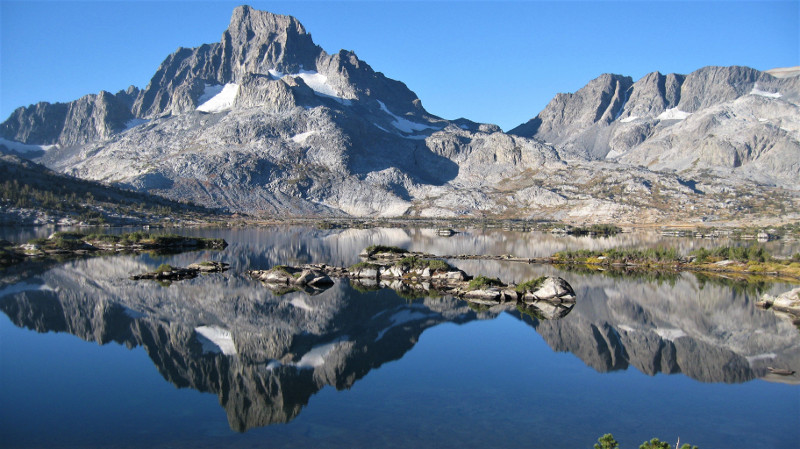 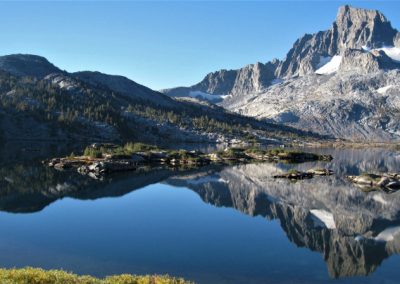 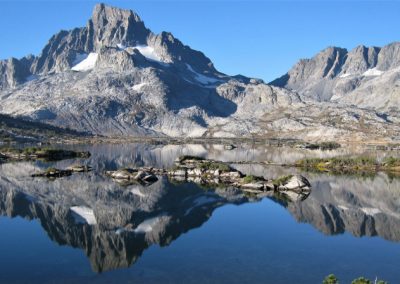 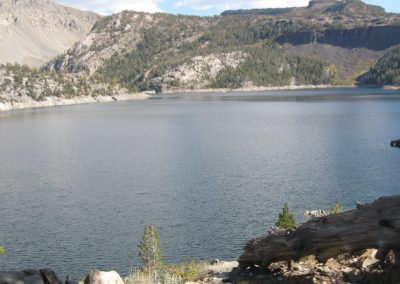 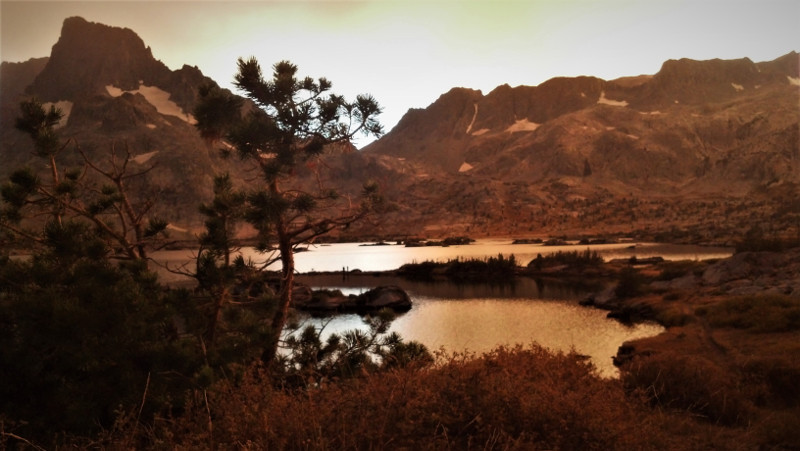 The morning was chilly, and once we’d shaken the frost off of the tent, we were eager to get back on the trail just to stay warm.

On the hike up to the top of the pass we passed three men on their way down, but other than that the trail was all ours. And what a beautiful trail it was – wide, with flat rock stairs, and perfect grades. I cannot get over how spectacular America’s National Parks are.

We were approaching the top of the pass when we encountered a fourth man. Standing majestically on a rock outcropping, one hand on his hip, the other holding a GPS, he reminded me of a bald eagle preparing for flight.

“You haven’t seen three other Asian guys, have you? I lost them last night when I was lost for three hours trying to find Thousand Islands Lake,” he asked, grinning from ear to ear.

We responded that we had passed three men earlier. He was happy to hear they were only an hour or so ahead of him. It turned out this was their first backpack ever. They were hiking sixty-nine miles in five days. This was day three.

“I am learning a lot!” he said enthusiastically. “Weight is important. My pack is too heavy, so I have just been leaving stuff on the trail. Hopefully, someone else will pick it up!”

Carl and I were curious as to what exactly he had been “leaving” on the trail.

I am by no means an expert backpacker. In fact, (assuming we survived and didn’t have to throw any pinecones or rocks at hungry bears) this forty miles would be the longest backpack I had ever taken. I was a weekend warrior. Ten miles to a lake, overnight, ten miles back. I stood there, looking at this entirely too enthusiastic man, completely bewildered by him.

I don’t know what was more perplexing to me, the fact that for their first backpack ever, they were eagerly attempting sixty-nine miles in five days. The fact that he was hiking with cologne (hot date? bear attractant?) Or the fact that he was lightening his load by leaving his shit stuff in piles on the forest floor. Or maybe it was just a combination of all of those things, combined with the fact that he had been lost overnight, seemed less than worried about it, and that his buddies had just left him up there.

As we left, I got the idea to one day write a cheeky book called “Backpacking 101.” As we hiked up the trail, I formulate the first two sarcastic, tongue-in-cheek chapter titles:

“Chapter 1: Ambition vs. Stupidity, How to Choose a Trail that’s Right for You” and, “Chapter 2: You are Not a Donkey, Notes on Packing Light.”

Four miles further up the trail, we stumbled across a pair of sandals, and a gallon Ziploc bag full of half-eaten foodstuffs stacked neatly together on a rock. Carl picked up the shoes; I grabbed the food bag and, thanks to our overzealous friend, our packs instantly became that much heavier.

Thousand Islands Lake was stunning. We rolled into camp just in time to get the tent up before it rained. Much to our dismay, the campground was surprisingly full. We snagged the last available campsite, which provided a jaw-dropping view of the sepia sunset that ripped through the clouds, casting the mountains and the perfect alpine lake dotted haphazardly with hundreds of tiny little rock islands, in a haunting orange hue.

“Honey, wake up! Someone is yelling at a bear!” Carl whispered in my ear.

Groggily, I opened my eyes. It was pitch black. Listening intently, I heard voices in the distance.

“Either that or he and his girlfriend got in a fight,” I replied, but Carl didn’t find my joke to be that funny.

I unzipped the tent door and watched entertained as two headlamps bobbed after a black shadow in the night. He wasn’t a big bear, but he was hungry, and they obviously had something he desperately wanted because he just kept on going back for more.

My survival instincts are strong, and they distinctly told me not to get out of the tent and throw rocks at the hungry bear. Instead, we did what any sane person would do, zipped up the tent door, and went back to sleep. 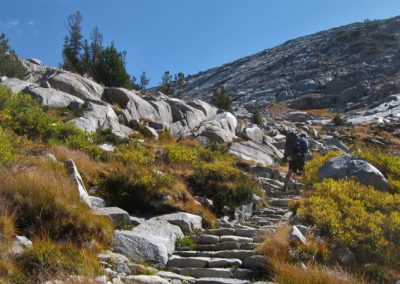 The Stairs To Donahue Pass 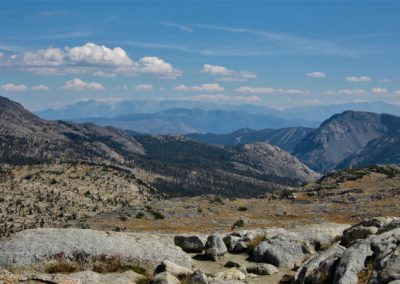 View from the Top of the Pass 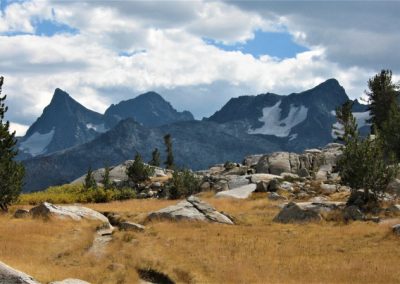