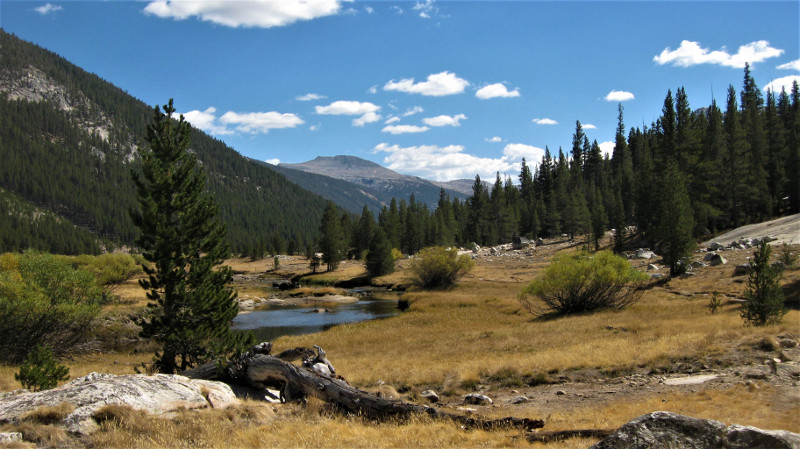 We were in Yosemite; this was exciting for two reasons. One, I had never been to Yosemite. Two, we had read that Yosemite had seven hundred and fifty miles of trails, and we had every intention of using at least forty of them.

Our goal had been to arrive in Yosemite month’s earlier to backpack with our good friend and backpacking Guru Captain Analogy. But in our bliss of finally traveling with no set-in-stone plans, we had become sidetracked and waylaid in route. It was now mid-September, Captain Analogy was long gone, and we had finally just arrived.

We set up camp in the Porcupine Flats Campground and had been there for all of five minutes when our camp neighbor Wayne wandered in to say “hello.” Wayne was a philosopher, a poet, and an ultralight, long-distance hiker who I felt was lying when he insisted he was seventy years old. If Wayne was seventy, I weighed a hundred and ten pounds (psst…I don’t weight a hundred and ten pounds.)

Within minutes of introducing himself, he had a plethora of National Geographic hiking maps sprawled across our picnic table, showing us his favorite hikes, and planning Carl and my next backpack. It was simple, twenty-one miles up the John Muir portion of the Pacific Crest Trail, over Donohue Pass and into the Ansel Adams Wilderness to Thousand Islands Lake. From there we could either turn around or we could make a loop by hiking over to Gem Lake, up and over Koip Pass and back into the Yosemite Valley. If we decided to make the circuit, he recommended checking trail conditions with a ranger as he had never done that section of trail. Well, that settled that; we hadn’t even been in the park for an hour, and we already had a plan. Wayne insisted we keep his map, “just in case we needed it.”

At ten o’clock the following morning, we were at the Permit Office.

“How is the Koip Pass Trail? Is it easy? Hard?” Carl asked.

“I don’t know your fitness level. For liability reasons, I can’t really say. I can, however, tell you it is a popular trail.”

“Does the shuttle still run between trailheads, or is it too late in the season? Can we leave our motorcycle at one end?” Carl asked, working out the logistics.

“No shuttles, you can leave your bike or just hitchhike.”

“Where do we leave the bear canisters at night?” I asked. We had never hiked anywhere with a “bear can” rule before.

“About a hundred feet from your tent should do. You want it to be close enough that you can hear the bear if it starts messing with it, that way you can provide negative reinforcement by throwing rocks and pinecones at him.”

Wait, what? Had she just said she wanted us to throw rocks…at a bear…in the middle of the night? Does anyone else find it odd that the Rangers couldn’t, for liability reasons, suggest or describe a hiking trail, but yet they could recommend hitchhiking and throwing rocks and pinecones at an animal that could take your head off with one bite? As a society, we had dug ourselves into a very bizarre hole.

Hefting the rented bear canister off the counter, we made our way out of the office.

“Did she just tell us to throw rocks and pinecones at a friggin’ bear?” Carl asked when we were in the parking lot and out of earshot.

We had the best intentions of getting to the trail at the ass-crack of dawn, but by the time we said goodbye to our chatty new friend Wayne and dropped our “shuttle vehicle” (Carl’s little motorbike) off at the end of the trail, it was well past noon.

Starting at the Lyell Canyon Trailhead behind the Tuolumne Meadows Wilderness Center, our trail led through forest and meadow, over sparkling white granite and across a short wooden bridge. Soon we found ourselves hugging the side of a long meadow, tucked in the valley between two towering peaks. The Lyell Fork of the Tuolumne River meandered slowly through the gilded grass.

It was fall, and although the morning air was crisp, the ambient midday temperature was perfect for hiking. The contrast of the bare white granite enveloped in golden aspen leaves contrasted brilliantly against the crisp blue sky. This was the stunning backdrop as we worked our way deep into the Yosemite backcountry. We were in heaven.

In no rush, we spent our first night at the edge of an alpine meadow, just before the trail started to climb up Donohue Pass. 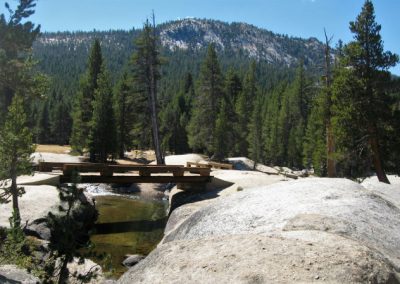 Near the Lyell Canyon Trailhead

Bridge near the Lyell Canyon trailhead 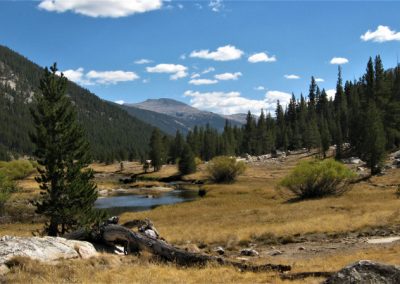 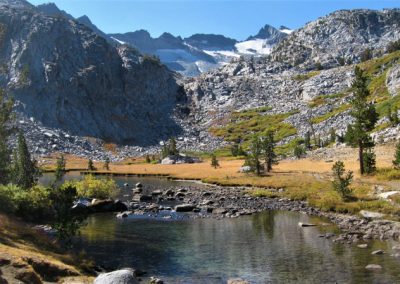 Looking Up Towards Donahue Pass, Yosemite 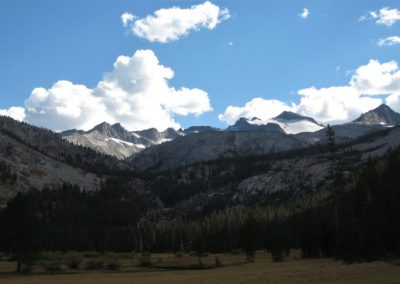